Lee Ryder has revealed that Eddie Howe confirmed Elliot Anderson would be fit enough to be in contention for Newcastle United’s next game.

Eddie Howe has seemingly been handed several injury boosts ahead of Newcastle’s trip down to London on Saturday afternoon with both Callum Wilson and Bruno Guimaraes declared fit and ready to be part of the squad.

A player who didn’t perhaps grab as many headlines when it came to his injury and now his return is Elliot Anderson as the youngster dropped out of the Scotland Under 21 side over the international break after he missed the Magpies’ 1-1 draw against Bournemouth but he is now ready to return.

Ryder, who dropped the information on Twitter, has claimed that Anderson, who’s yet to start a Premier League game, is now back in contention for this weekend’s clash.

(1:06) “Newcastle have had lots of activity over the phones with medical staff and obviously, Elliot Anderson missed the last game a long time now against Bournemouth, he’s back in contention as well.

Do you want Anderson to start vs Fulham? 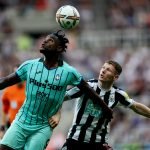 “So Newcastle looking like a bolstered squad going to this game at Fulham, a tough game down at Craven Cottage.”

While Anderson is still yet to start a league game for the Magpies, his return will indeed be a welcomed boost from Howe as he would provide a solid option at least off the bench if the Magpies end up chasing the game at Craven Cottage.

Although his stats may be slightly skewed due to his lack of starts this season, Anderson is clearly good enough to cut it at this level as he boasts 12.86 Shot-creating actions per 90 minutes, which is simply outstanding (FBref).

It was seemingly all set up for Anderson to thrive this season after impressing in League Two last time out and his former teammate Alex Rodman has previously labelled him as the ‘Geordie Maradona‘ such is the ability he has at his feet.