Celtic star Jota left Ally McCoist in awe during the demolition of their local rivals on Saturday at Parkhead with a sensational finish inside the first half.

Celtic cruised to all three points at Parkhead on Saturday with a stunning first-half display seeing Ange Postecoglou’s side take a three-goal advantage into the break.

The points has now extended the Bhoys’ lead at the top of the Scottish Premiership table to six points over their city rivals having now won all six of their opening games.

And it was their 23-year-old who provided the second goal of the afternoon with a delightful chip over Jon McLaughlin from a tight angle inside the box.

McCoist was commentating on the game for Sky Sports and he could not hide his admiraton for what the Portuguese star did inside the Rangers box:

“The touch is excellent, the finish is absolutely exquisite. It’s breaking my heart. What a goal that is,” McCoist said (via Daily Express).

“The finish is absolutely sublime. But I’m gonna take you back to the free-kick. As soon as the free-kick is taken, there’s three Rangers players switch off.

“Kamara, Kent and Lundstrom not looking at the ball at all and facing the wrong way. Take nothing away from the goal because the finish is, as much as it pains me, is sublime.”

It is hard to disagree. The finish was simply sensational. To find the back of the net in such a calm manner in a game of such magnitude is a real sign of the winger’s quality.

Is Kyogo's injury a major concern? 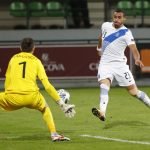 However, he will need to replicate this kind of quality in front of goal during the week against Real Madrid with Kyogo Furuhashi a likely doubt for the game having been withdrawn in the opening minutes.

Celtic went all out this summer to bring Jota back to Parkhead on a permanent basis, it was not easy, but it was certainly worth it when he produces moments of absolute quality like that.