Journalist Oli Gamp has highlighted on the Spurs Chat podcast how poor Harry Kane was for Tottenham Hotspur against Sporting, claiming his below-par performances are not talked about enough.

It was a disappointing night in Europe for Tottenham and Antonio Conte as he watched his side taste their first defeat of the season in any competition thanks to two goals late in the second-half after Spurs squandered several gilt-edged chances.

However, someone who was less than impressive was Kane, with the striker boasting the worst pass completion percentage of any Tottenham player with 67.7% (WhoScored), which was also accompanied by just one shot on target all game.

Speaking after the game on Tuesday night, Gamp pointed out the striker’s below-par performance in the Champions League.

Has Kane underperformed this season? 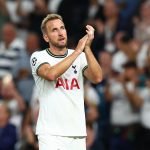 In terms of goals scored, it’s been a super start to the season for Kane, with five goals across all competitions – with four of them ending up being strikes that directly earned Tottenham points – so perhaps this recent display was a rare off-night.

However, based on Gamp’s comments, you do get the impression this is not the first time Kane has fallen below the standards expected.

Having said that, while he is still managing to tick along well with goals, teammates Dejan Kulusevski, Son Heung-min and Richarlison have just one league strike between them this campaign, which is less than ideal.

The good thing for Spurs and Kane is that they have a game on Saturday evening against bottom club Leicester City, which should be the perfect way for them to bounce back after a cruel and late blow in the Champions League.