Wolves: ‘Monster’ Matheus Nunes signing has ‘gone under the radar’ 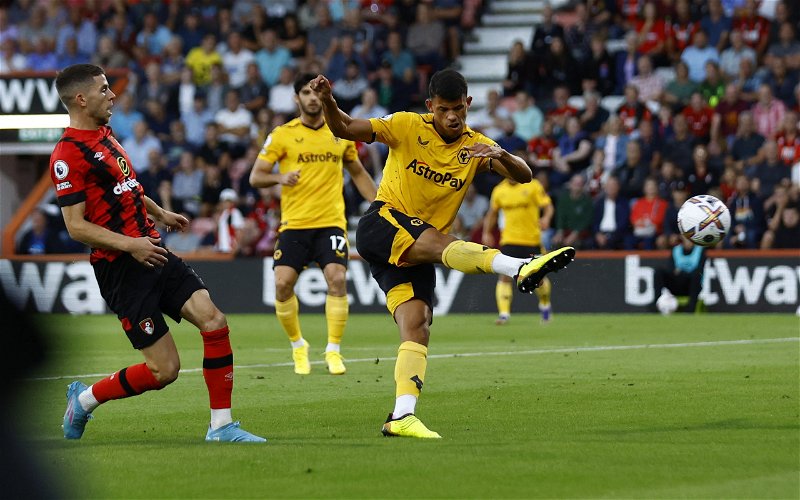 Wolves may have signed a “monster” in Portugal midfielder Matheus Nunes – but it is only a matter of time before a bigger club comes calling for the midfielder.

That is the view of Midlands journalist Josh Holland, who was speaking to GiveMeSport about the latest news from Molineux.

Bruno Lage welcomed five new faces during the summer transfer window, with the most prominent being that of Nunes’ club-record £38m signing from Sporting.

The 24-year-old midfielder has started in every game since his arrival in August and managed to provide an assist for Daniel Podence in the club’s 1-0 victory over Southampton.

Holland believes that the eight-time Portugal international could be a hit at Molineux and could end up playing for one of the elite Premier League clubs should he impress in the West Midlands.

He said: “I don’t think João Moutinho is going to start that many games, so Nunes is almost a perfect replacement.

“He showed on his debut against Spurs that, after Wolves sold Morgan Gibbs-White and brought in Nunes, he could do more than a job sitting in that number 10 role.

“I know that a lot of people have looked at his highlights and videos from when he was at Sporting.

“He is a monster.

“He was giving Pierre-Emile Højbjerg and Rodrigo Bentancur a difficult time in his first game in England and I think that signing has gone under the radar a bit.

“I think it’ll be a year or two until teams like Liverpool or Spurs come in for him.”

We believe that Nunes, who has been described as “one of the best players in the world” by Manchester City manager Pep Guardiola, is the exact profile of signing Wolves needed in the midfield, with his ability to get up and down the pitch likely to prove to be a massive boost for Lage this season.

The Rio de Janeiro-born star ranks in the top 1% of midfielders across Europe’s top five leagues and European competition for dribbles completed per 90 minutes (2.54) over the last 365 days according to FBref, suggesting that the former Sporting man is comfortable with driving the ball up the field.

We think that if Nunes can hit the ground running in the Premier League this season, it might not be long before Wolves are asking for double what they paid for the midfield maestro this summer.