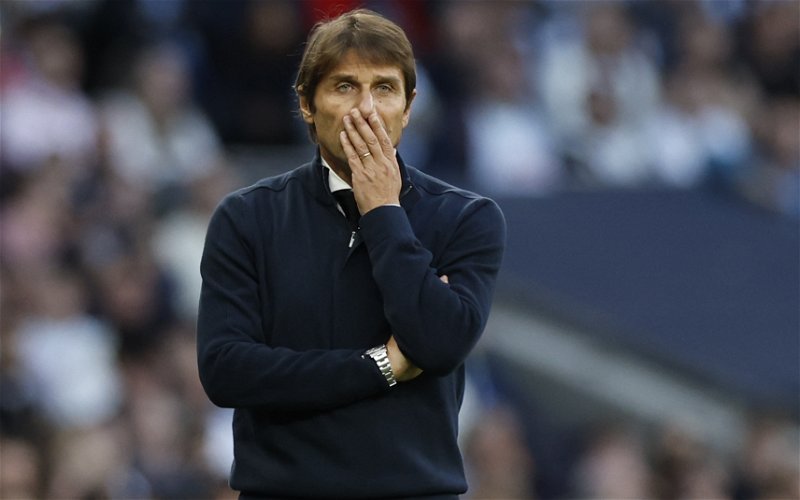 The Athletic’s Tim Spiers has said that he doesn’t believe Tottenham Hotspur manager Antonio Conte is angling for a move away from the club at the time of writing, amid links of a return to Juventus.

Spiers was speaking on The Athletic’s The View From the Lane podcast, following the club’s 6-2 demolition of Leicester City last weekend.

It has been reported that Conte is on the radar of those at Juventus as the Serie A giants consider the future of their current manager following their dismal start to the season.

The Old Lady have had a nightmare start to their domestic campaign, losing 1-0 at newly-promoted Monza last weekend, and sitting in eighth in the Serie A table, which has cast doubts over the future of manager Massimiliano Allegri.

However, Spiers doesn’t believe that Conte sounds as if he’s tempted to jump ship and leave the Tottenham Hotspur Stadium at the moment, with it seemingly looking like the Italian is at the beginning of a project in north London.

“Everything I’ve heard Conte say, since I’ve started covering the club, is that he very much feels like he’s at the start of a project, trying to build something,” Spiers told The View from the Lane podcast.

“Certainly not sounding like he’s angling for a move or that he’s unhappy. I think he’s starting to build something.”

We agree with Spiers and believe that it would seemingly be an odd time for Conte to re-join Juventus, with both Spurs and the Serie A club seemingly heading in opposite directions.

After being backed with reportedly over £150m worth of signings this summer, we struggle to see any desire that the 53-year-old manager would have for leaving the Lilywhites this summer, especially with the club sitting third in the Premier League table at the time of writing.

Therefore, we think that Spurs fans will be relatively comfortable in the knowledge that Conte is seemingly highly unlikely to swap his current employers for his old club at this moment in time.