Ben Jacobs has claimed on The Done Deal Show that Newcastle United have indeed held talks over the signing of Youri Tielemans.

The Magpies have been left rather depleted in the centre of midfield following injuries to Bruno Guimaraes and Jonjo Shelvey, with Eddie Howe having just four players to choose from in his preferred three-man midfield formation.

It has been reported that Newcastle are one of the Premier League clubs in the hunt for Tielemans with just a few hours left of the transfer window, while Luke Edwards has confirmed that the Magpies are still looking to be active in the hope they can add before the deadline passes.

Jacobs has confirmed that while no bid has been made for Tielemans, talks have taken place.

He said: “We’ve got three Premier League clubs circling. Newcastle have not yet tabled a formal offer – there have, though, been some talks through intermediaries and the same applies for Arsenal.

“From Liverpool’s perspective, they work pretty secretly and Jurgen Klopp’s already said that their top midfielder choice that they wanted went to another club, so they might have moved on at this point. 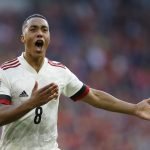 Newcastle are certainly in need of a central midfielder, although a lot of reports have claimed that any deal would likely be a loan move, although much like the signing Alexander Isak, if the right offer shows itself, then PIF would perhaps take the plunge and splash more cash.

It’s quite bizarre that given Tielemans has just one year left on his contract and is available for £30m, nobody has tabled a formal offer for the Belgian midfielder, who had been hailed as a phenomenon, with just a few hours left of the transfer window.

Whether or not Eddie Howe sees Tielemans as the right kind of character for his squad, something that Keith Downie claims is making any deals difficult to complete, remains to be seen and could be a factor in them not going for the Premier League ace.