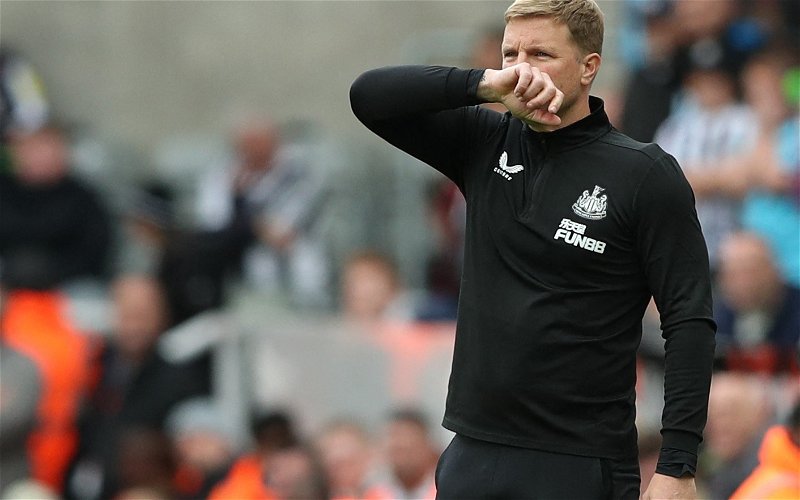 Newcastle United could be “putting everything” into adding a winger to the squad in the January transfer market.

That is according to Sky Sports reporter Keith Downie, who was speaking to This is Futbol about the latest news at St. James’ Park during the international break.

Eddie Howe has been gifted with five new additions to his squad during the current campaign so far, but the club failed to add a winger to the side.

There are currently six senior players in the squad who could be capable of playing in the wide positions across the Magpies’ front three, but a hamstring injury to Allan Saint-Maximin has demonstrated a lack of quality out-wide when he’s unfit.

And Downie believes that the club could put a big focus on adding to the wide department when the transfer window opens for a month in January.

“I could envisage them putting everything in to get a player in that position in January,” Downie told This is Futbol.

We believe that Newcastle are in need of another option out on the wing, with the club seeming to be blunt in attack without the services of Saint-Maximin.

The Magpies had identified Bayer Leverkusen and France winger Moussa Diaby as a transfer target in the summer, with the Bundesliga side looking for £55m for the wide man’s services.

However, the 23-year-old ended speculation over his future when he confirmed he would be playing for Leverkusen this season.

But there is no saying that Newcastle won’t go back in for their former transfer target in the winter, and having seen their struggles when injury strikes, they may now be willing to pay the extortionate fee that the Bundesliga side are looking for.