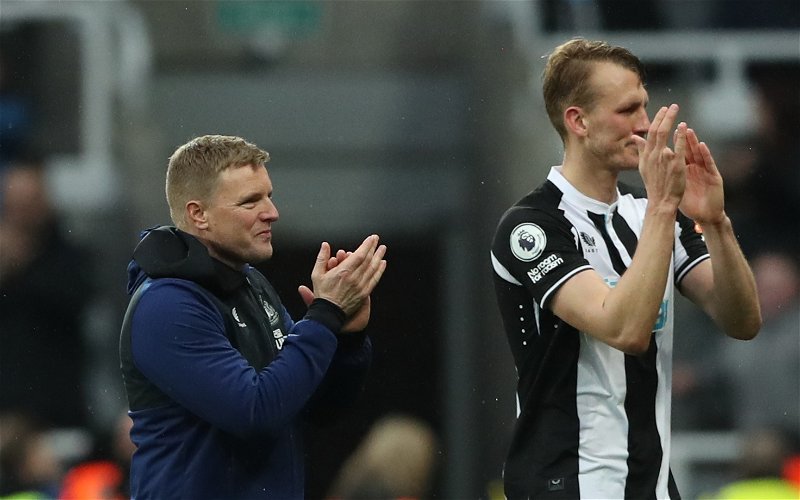 The 30-year-old centre-back was speaking on the BBC’s Football Daily podcast, where he was asked multiple questions about his Magpies career so far.

Having signed for the Tyneside club for £13m, the former Brighton & Hove Albion defender would have had to adapt to the training methods of Howe after spending the last two years under the guidance of Graham Potter.

It was vital that Burn could adapt to Newcastle’s style of football as quickly as possible with the Magpies embroiled in a relegation battle at the time of his arrival.

And the Blyth-born defender has been impressed with the various different sessions that Howe offers his side.

He said: “I think with Eddie now, I think the way that we play demands a certain level of intensity and I think it comes every single day.

“So the sessions were a lot longer than what I was used to and I think I took a little while to get used to.

“What I find crazy about the gaffer’s training at the minute is that we never really seem to do the same session twice.

“He’s got so many sessions saved, or however he does them, but every single day is something completely new.”

We believe that despite the defender admitting he took a while to get used to Howe’s training schedule and methods, the centre-back has performed to an exceptional standard since arriving at St James’ Park.

The 6ft 6in defender has been able to make use of his obvious physical advantage whilst playing for Howe’s side, ranking in the top 3% of centre-backs across Europe’s top five leagues and European competition for aerial duels won per 90 minutes (4.41), and in the top 6% for clearances per 90 (5.87) over the last 365 days, according to FBref.

Therefore, we believe that Burn has been a useful addition to the Newcastle side and has clearly demonstrated a willingness to adapt to Howe’s coaching methods since his move to Tyneside in January.