Journalist Ben Jacobs has revealed on the Mouth of the Tyne YouTube channel that PIF’s secret minimum target is a top-half finish for Newcastle United this season.

A lot has been made of what Newcastle should be aiming for this season, mainly because Eddie Howe had managed to fully turn around the club’s fortunes in 2022 and they remain one of the most in-form teams, largely thanks to last season’s superb run of results.

Newcastle have only lost once all season thanks to a 98th-minute winner away to Liverpool in a game they may well have felt hard done by given how much added time was indeed played, but despite this good start to the campaign, targets are relatively low, according to Jacobs.

PIF are said to want at least a 10th-place finish in the Premier League.

Jacobs said: “Because hey’ve kind of had an inverse of most clubs in how they’ve approached the last two windows, January might be a big window again, and they may look to get themselves over the line to get European football a little bit earlier than perhaps the plan is.

Would you be happy with NUFC finishing 10th? 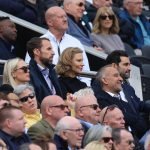 “I think that’s what’s really interesting about the short term for Newcastle, that from a budgetary point of view, even though clubs will never put this out there, they’ll be aiming to finish 10th – it’s what most clubs do. And then that is your bottom line for what you’re planning for.”

While finishing 10th isn’t likely to get the pulses racing on Tyneside, if this is coupled with one or two recent cup runs and not being involved in any sort of relegation battle – something that’s happened over the past few years – Newcastle fans would likely take that.

However, the difficulty comes when players such as Bruno Guimaraes, Alexander Isak and Sven Botman are then looking at the situation of facing another full season of no European football, which is something they will have likely spoken about before putting pen to paper on their deals with Newcastle.

Therefore, it’s a fine balancing act between not wanting to rush the process and ensuring that Newcastle can keep all of their players happy in the short and long term.

Though given the money in the Premier League, finishing 10th may well be more than enough to give Newcastle the foundations to build their squad and grow into the club PIF hope the Magpies can become.