After what was a disastrous season last time out at Elland Road, the Leeds board were clearly keen to ensure there is no repeat as they fully backed Marsch in the transfer market with eight new signings.

What made it even better was the fact that Leeds got the majority of their business done early on, which has allowed them to gel and settle into the squad, which in turn, has helped them have a solid start to the season, with eight points from their opening six league games. 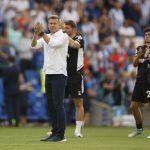 “A lot of new managers or coaches, I feel, aren’t supported in the way they actually want to be, so they get players thrown at them and [told] ‘deal with this’. Whereas Jesse Marsch, very clearly, has gone, ‘I want this guy, this guy, this guy and they are going to play in this way, and they’re all from the Red Bull Group, and they already know me’. So hats off to them.”

It is a huge sign of support from Leeds to back Marsch with the specific players that he wanted to be brought to Elland Road because if it doesn’t end up working out for Marsch then the next manager would have to deal with what the American boss has left behind having a unique style of play and tactics.

However, this is the best possible way for things to hopefully succeed at Leeds for Marsch, hand him the players that best suit his methods and way of playing, therefore, they’ll likely yield the best results.