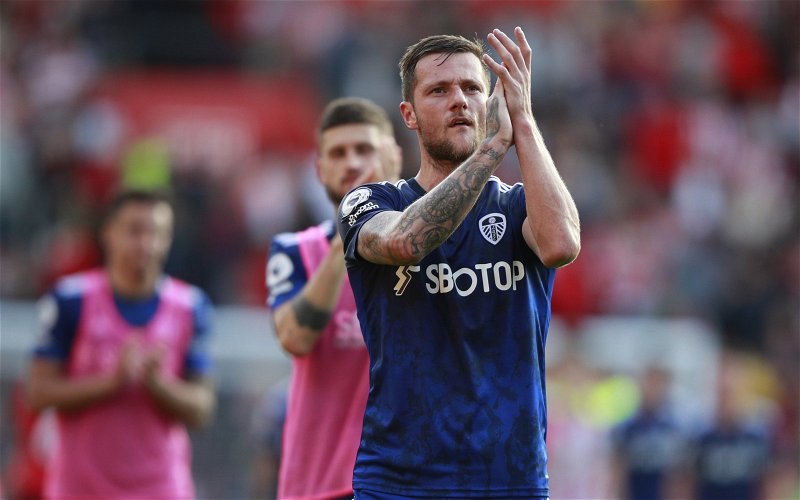 Beren Cross has spoken about how Liam Cooper should be replacing Diego Llorente when Leeds United next kick-off.

It’s been an indifferent start to the season for Leeds under Jesse Marsch with two wins from their opening three league games giving cause for optimism amongst the fanbase, but it’s now three games without a win for the Whites.

They have also been hit with an unexpected lull in Premier League football with the Whites facing a 29-day gap between their last game and their next match against Aston Villa, but Cross has already hinted at one change to the starting lineup March should be making.

Cross has claimed that captain Cooper should be coming in for the out-of-form Llorente in Leeds’ next match.

‘Diego Llorente, called up for Spain duty once again this week, had a horrible time of it at Brentford and even with the passing of time, could do with a spell out of the firing line. If it were somebody less senior waiting in the wings, backing Llorente would have some merit, but when it’s a left-footed captain it becomes a clearer decision.’

TIF Thoughts on this Leeds change…

Who do you want to start for Leeds?

It’s no surprise that Cross is keen to see Llorente at least taken out of the firing line for a short period of time because he’s made several high-profile errors in Leeds” last two games against Everton and Brentford respectively.

He was single-handedly at fault for the goal Leeds shipped against Everton and made countless mistakes in the build-up to the majority of Brentford’s goals, and now that Cooper is seemingly in contention to return with Cross bringing him up, it could well be an easy swap for Marsch.

The Scotland international has not kicked a ball in the league this season due to injury but while this gap in play will be irritating for fans, if it means someone as trustworthy and dependable as Cooper has more time to get back fit and prove to Marsch he’s ready to start, it could work out better in the long-term.