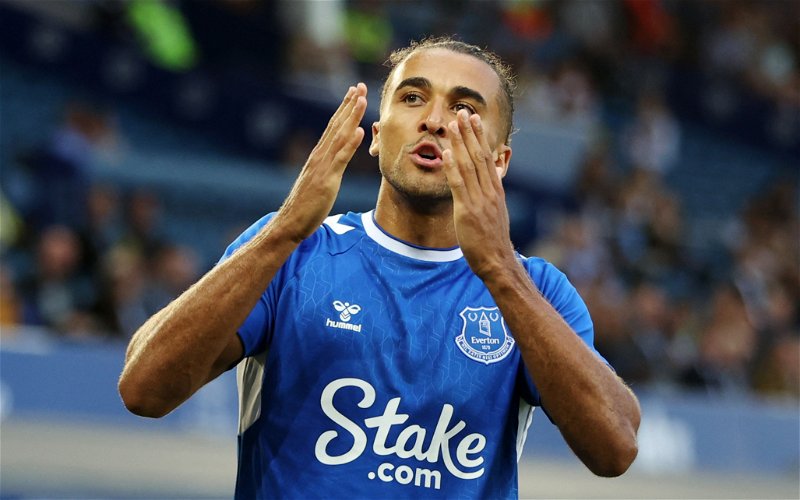 Everton striker Dominic Calvert-Lewin can help the Toffees turn draws into wins when he returns to the side following a knee injury.

That is according to journalist Pete O’Rourke, who was speaking to This is Futbol about the latest news from Goodison Park.

After sustaining a knee injury in training ahead of Everton’s opening Premier League game of the season, fans of the Merseyside club will be delighted to hear that Calvert-Lewin has returned to full training, with Frank Lampard’s side preparing for the visit of West Ham United at the weekend.

The club have experimented with a number of options in the centre-forward role during the 25-year-old’s absence, including playing winger Anthony Gordon down the middle, as well as Venezuelan striker Salomón Rondón.

The club’s signing of Brighton and Hove Albion striker Neal Maupay should ease some of the pressure down the middle for the Toffees, but it will be Calvert-Lewin’s return which really gets fans excited.

And O’Rourke believes that Everton’s main problem this season has been scoring goals, with the club lying in 16th place in the Premier League table, following four draws and two defeats.

“I think everybody knows Everton’s problem.

“It’s scoring goals, they haven’t had a recognised number nine this season due to Dominic Calvert-Lewin’s injury.

“So, the sooner he’s back the better for Everton, I’m sure he’ll be able to get the goals that might turn some of those draws into wins for Frank Lampard’s side.”

We believe that Calvert-Lewin’s absence has been keenly felt throughout the squad at Goodison Park, but we believe that the 11-time England international’s return may signal an upturn in form, at least in the goalscoring department.

The Sheffield-born striker, who has been described as “brilliant” by the Echo’s Joe Thomas, has been a reliable source of goals for the Toffees, and in his last full campaign (not hampered by injury) in 2020/21, the Everton star managed to score 21 goals and provide five assists according to Transfermarkt, suggesting that when he’s not fit the Merseyside club lose a large amount of their cutting edge.

We therefore believe that Calvert-Lewin’s return to full fitness could be the springboard Everton need to fire up the Premier League table, and his availability may be critical to their success this season.