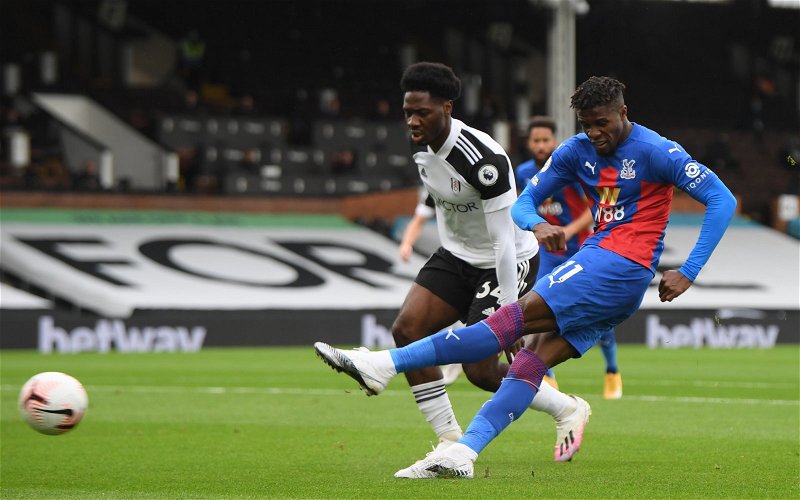 Dan Cook has been speaking on the HLTCO podcast about how Wilfried Zaha could still retire at Crystal Palace.

It has been a rather hectic last few months for Zaha and Palace, with the winger being heavily linked with a summer exit given he has just 12 months left on his contract, but the deadline came and went with the Ivorian still in Palace colours.

While reports have since suggested that Zaha will reject any contract that is put forward by Palace as he wishes to explore his options as a free agent next summer, Cook believes that the winger could yet retire at Selhurst Park.

Cook claimed that in the event he leaves next summer, he can still see Zaha returning to Palace and retiring in SE25, saying:

“He will always be a legend to Crystal Palace fans, regardless of what happens at the end of this particular contract. For my money, even if he does decide to leave Crystal Palace this summer and move onto pastures new, there is still a very high chance that he will end his playing career in Crystal Palace colours.

“Just because he moves to another football club doesn’t mean that he won’t have a huge amount of affection for Crystal Palace, and you would expect that in the twilight years of his career, he will come back.

Will Zaha retire at Palace?

“I would expect him to be part of the furniture by the time he is a retired player, because he’s so important to Crystal Palace, grew up down the road and it really embodies what our academy is all about and what the football club in general wants to portray to the world.”

It will be a major blow if and when Zaha does depart Palace, as he is, as Cook put it, a legend at Selhurst Park given he tops the all-time top scorer and appearance maker lists during the Eagles’ time in the Premier League.

However, if Zaha has already made it clear to the Palace hierarchy that he doesn’t intend to sign a new deal, it would at least allow everyone to prepare mentally and ensure Zaha gets the send-off he deserves when the time comes.

There are no signs Zaha will be short of potential suitors in January or in the summer when he can speak to any club across the globe – especially if other sides view him in the same light as Gary Neville, who recently likened him to Thierry Henry on Monday Night Football (via HITC) for his finish at Anfield earlier in the season, which set Palace on their way to picking up a valuable point away from home.