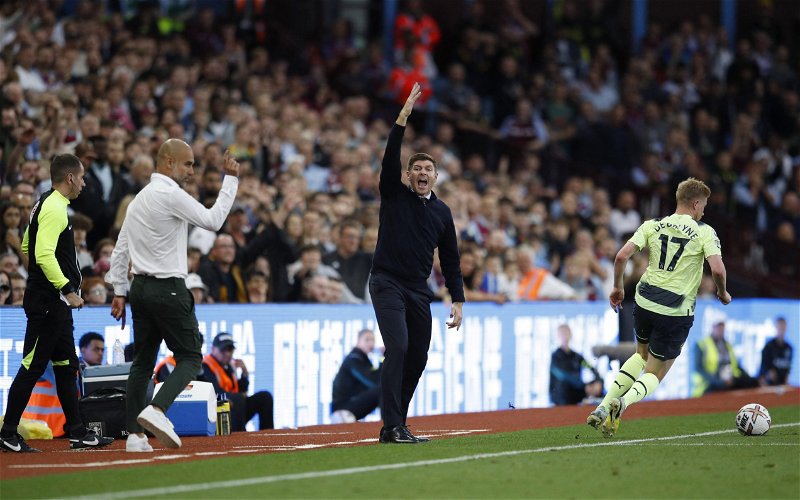 Former Villa striker Darren Bent recently told TalkSport that failure to secure two wins in their next four games could be enough to see him sacked.

Gerrard’s side currently sit 17th in the Premier League after winning one game and earning four points from a possible 18 so far.

Football Insider reported at the end of August that the former Rangers manager’s position could be under threat if results don’t improve for Villa soon, while there has more recently been talk in the media that his future is ‘hanging in the balance’, so Bent could certainly be onto something.

Sacking Gerrard would likely provide the club with a number of knock-on effects, so let’s take a look at just a couple of the main possibilities.

There is no doubt that Gerrard’s standing in the game means that Villa may be a more attractive prospect to potential players than they would have been if they didn’t have the former Liverpool legend in charge.

Philippe Coutinho is arguably the highest-profile example of this, with the attacking midfielder willing to swap Barcelona for Villa in January in order to get more playing time and play under his former teammate.

Though results may leave the club with no choice, we think that the sacking of Gerrard could result in the club taking a big step backwards in terms of recruitment, and in turn, success on the pitch. The club’s funds are only able to get them so far if they are not playing or competing for European football on a regular basis.

And having targeted European football with Villa, it’s safe to say that Gerrard’s efforts to achieve this have not come to fruition so far.

Therefore, we think that the decision to relieve the former England midfielder of his duties as manager may not be a decision quite simply based on results, as it may indicate a total change of approach.

The biggest story of Villa’s summer was not about the club’s new signings or departures this summer, but that of Gerrard’s decision to strip 17-time England international Tyrone Mings of the captaincy and hand it to Scotland international John McGinn.

To further heighten the talk of a fallout between Mings and Gerrard, the Villa manager proceeded to drop the 29-year-old from the club’s first starting lineup of the season at Bournemouth, before recalling his former skipper to the side for the following weekend’s game against Everton following the injury to Diego Carlos.

If the club were to relieve Gerrard of his duties this summer, Mings may sense an opportunity of redemption, whilst at the other end of the scale, McGinn may feel a sense of unease having received the full backing of his manager this season.

We therefore think that if Villa were to go ahead and sack their manager, it may relieve some of the tension around Mings’ future and the centre-back may be able to return to his best form without the added scrutiny of the last few months.

Would Villa lose their pull if Gerrard was to depart? Would Mings get back to his imperious best without the guidance of the former Liverpool legend?

It’s something that Gerrard will be hoping we don’t have to contemplate in the next few weeks as he looks ahead to three massive fixtures against Southampton, Leeds United and Nottingham Forest.

With a kinder-looking fixture list ahead, we can see why Bent feels he could be in trouble if their poor results continue. But the board will have plenty to consider should they contemplate sacking Gerrard, and will have to weigh up whether they have to sacrifice their lofty ambitions in order to save their Premier League skin.

And amid the potential tensions in the squad at present, there could yet be a positive effect if Villa handed someone else the opportunity to turn things around. Overall, we simply would not like to be in the Villa owners’ position right now.