Tottenham Hotspur are still expected to bring in one or two new players in the final weeks of this summer’s transfer window.

This has been suggested by transfer guru Dean Jones, who has been talking about what is set to come for the Lilywhites during an appearance on The Done Deal Show.

Spurs are now just days away from getting their 2022/23 campaign underway in north London against Southampton after an impressive summer of business so far.

Antonio Conte has seen six new players come through the doors at Hotspur Way and will have five of those to select from, with Richarlison serving a suspension.

With around one month remaining in the summer window, Jones believes there is still an expectation Spurs will add to their squad – and add some serious quality, at that.

He said: “What I think we’ve got to remember is that those six players [signed] were needed for the squad. There are one, possibly two spots that they’re still going to look to strengthen.

“And they will be those standout players, the luxury players, the ones that take your squad to that next level, that challenge maybe players in that starting XI that weren’t expecting to be challenged.”

We find these comments really interesting, especially as there are reports doing the rounds suggesting Spurs hold an interest in Leicester City’s James Maddison.

Should Spurs rival NUFC for Maddison? 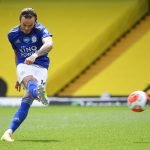 Reliable journalist Alasdair Gold has claimed the club have played these reports down, but he did add that he could imagine Spurs making a move if other clubs register their interest.

And that is exactly what is happening with Newcastle United, who have submitted two bids for Maddison in the last few days, so we will be intrigued to see whether this would see Spurs spring into action or focus their interest elsewhere, with the likes of Nicolo Zaniolo also linked.