Tottenham Hotspur: Journalist believes Milan Skriniar is one to watch this summer 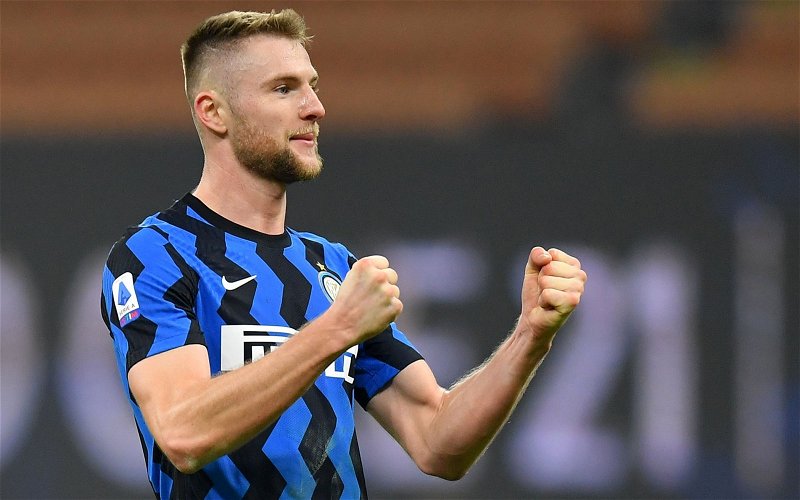 Tottenham Hotspur could still be looking to sign another centre-back this summer and Milan Skriniar is a potential option, according to journalist Ben Jacobs.

Spurs have bolstered their defensive options this summer, bringing in the likes of Clement Lenglet, Djed Spence and Ivan Perisic so far as they look to compete in the Premier League and the Champions League this season.

However, it appears they could still look to bring in another centre-back as it is a priority position for boss Antonio Conte, and Jacobs believes Inter’s Skriniar could be a target as the Italian giants will need to sell a superstar – while Paris Saint-Germain have cooled their interest.

Jacobs told the Last Word on Spurs podcast: “Centre-back could be another priority area where Tottenham look to strengthen. They have kept an eye on Bastoni – Inter [are] highly unlikely to let him leave.

“But Skriniar is another option and Tottenham are loosely in the race – and the good news for Spurs and Chelsea with Skriniar is that Inter, I think, will eventually have to sell somebody big, and PSG, for now, have cooled their interest. So that’s one to watch between now and the close of the window.”

TIF Thoughts on Skriniar to Spurs…

Despite already bringing in a number of big talents this summer, it is not surprising Spurs are looking to bolster their centre-back position further, as outside of their starters, they struggle for quality in depth.

Spurs could be left with Davinson Sanchez as the only other recognised centre-back in the squad, with the club sending Joe Rodon on loan and Japhet Tanganga being linked to Milan.

We think Skriniar, who once had a value of €120m (£100m), would be a great signing for the side as he is a top-level talent with Champions League experience, and as Inter need to let go of a player to balance the books, Spurs could end up getting him for a cheaper price than he is worth.

Last season, the Slovakian, who has been called an ‘absolute beast’, played 48 games for Inter and picked up four goals while ranking in the 96th percentile for progressive passes received and pass completions and in the 86th for shot-creating actions (as per FBref).

These stats show that while he could help their defence, he can also help create for their impressive attack including Harry Kane and Son Heung-min. He is a multi-faceted defender who will only improve Spurs and we believe they should look to bring him in whatever the cost.