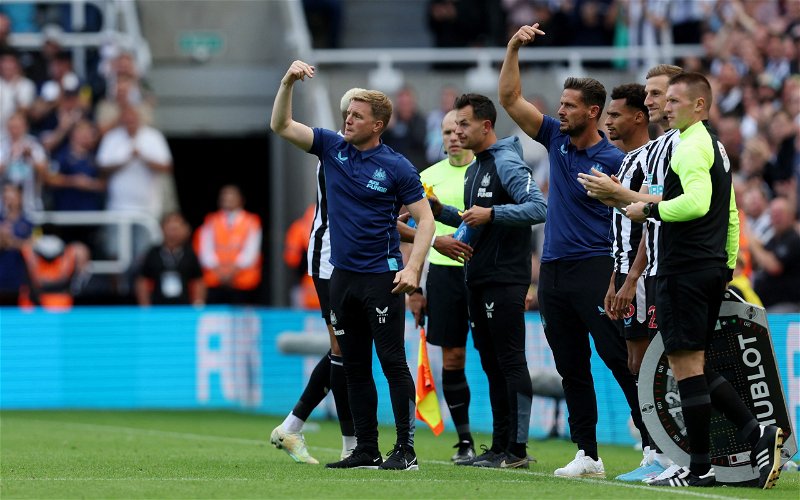 Newcastle United manager Eddie Howe may prefer for the club to sign players with Premier League experience this summer.

That is according to Keith Downie of Sky Sports, who was speaking to This is Futbol about the latest at St James’ Park as they look to make more additions before the transfer window closes.

The Magpies have signed three players this summer, two of whom have Premier League experience in Burnley goalkeeper Nick Pope and Aston Villa left-back Matt Targett, who ended last season on loan at Newcastle.

Whilst the club have been linked with moves for players such as Bayer Leverkusen winger Moussa Diaby and Real Sociedad striker Alexander Isak, it seems the club have made a conscious effort to look at Premier League-proven players this summer, with James Maddison, Harvey Barnes and Jack Harrison all linked with a move to Tyneside during the transfer window.

And Downie believes that Howe would prefer for the club to sign players with top-flight experience in England – though hinted selling teams seem to raise their prices when Newcastle become linked with one of their players.

He said: “I think that’s something that Eddie Howe would prefer – I think he’d prefer someone who’s got Premier League experience, but I think the problem is operating in that market.

“All the clubs – not just foreign clubs – English clubs inflate their prices when it’s coming to Newcastle as well.”

We believe that the safest way to recruit in the Premier League is to invest in players that have already had experience in the division, as there should be less risk involved in buying players who know the league.

However, the club have experienced joy in recent months through the signings of players from leagues abroad – most notably the £40m addition of Brazil midfielder Bruno Guimarães from Lyon.

Despite this, we think that if Howe wants to take that next step and fire the Magpies into the top half of the Premier League, now is the time to recruit players with more experience in the English top flight.