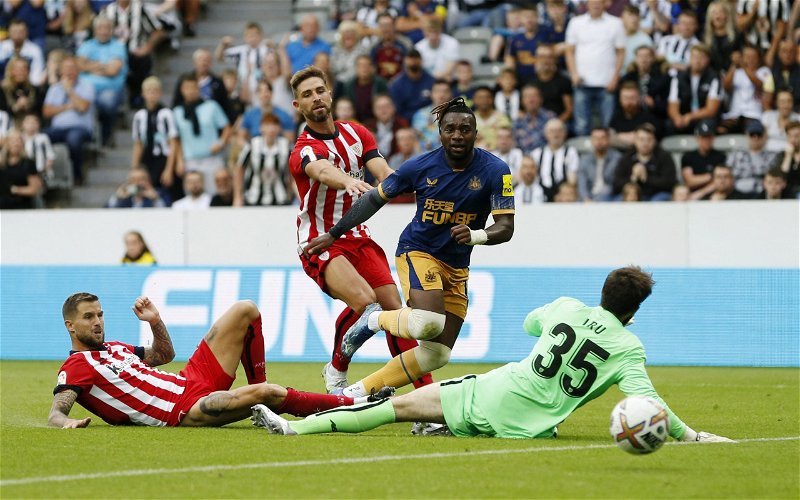 Newcastle United may not be including winger Allan Saint-Maximin in their long-term plans.

That is according to Dean Jones, who was speaking to This is Futbol about the club’s transfer plans, ahead of the remaining few weeks of the transfer window.

It had been reported in July that both Chelsea and Tottenham Hotspur were interested in the signature of Saint-Maximin this summer.

However, both clubs were put off by the Magpies’ valuation of the 25-year-old, which is reported to be £40m, according to The Athletic.

But Jones doesn’t believe that Saint-Maximin features in the club’s long-term plans, and will be interested to see how the speedy winger performs in the early stages of this season.

“I don’t think that Saint-Maximin features in Newcastle’s long-term plans, but it will be interesting to see if he can make an impact at the start of the season and keep himself around for the duration of this season.”

We believe that fans of Eddie Howe’s side will be disappointed to hear that Saint-Maximin doesn’t feature in the Magpies’ long-term plans, with the winger proving to be one of the club’s most exciting players.

The former France U21 international, previously dubbed as “breathtaking” by Gary Neville, made 37 appearances for the Toon last season, scoring five goals and providing five assists according to Transfermarkt, potentially suggesting that the Frenchman will need to improve on these numbers to convince the club to keep him at St. James’ Park in the long run.

Therefore, we believe that, whilst Newcastle fans may be disappointed with Jones’ update, we think that if another club were to bid £40m for the winger, PIF should be thinking about potentially selling Saint-Maximin.