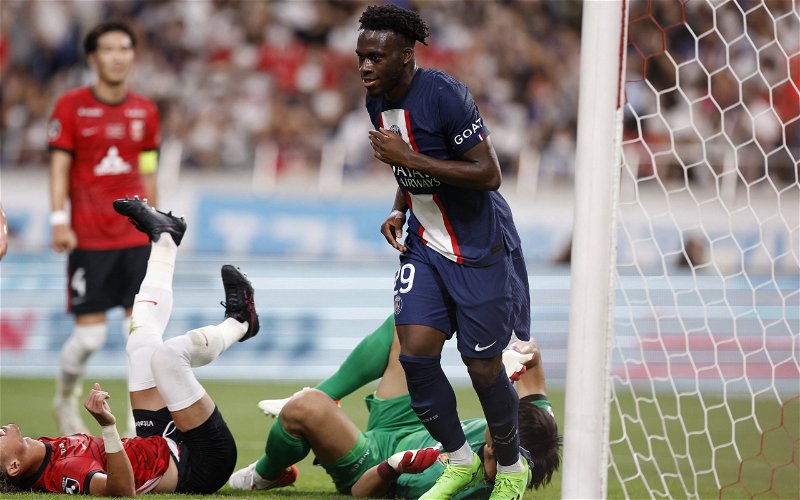 Journalist Dean Jones has given Leeds United a boost as he has claimed that Arnaud Kalimuendo might be sold before the transfer window shuts.

Leeds have been on the hunt for a striker for the majority of the transfer window and Kalimuendo has been one of the main targets, as they launched a £16.8m offer for the young forward earlier on in the window according to reports in France.

However, Premier League rivals Newcastle United are another club that have shown interest in Kalimuendo.

Whilst speaking with GiveMeSport, Jones has claimed that those at Paris Saint-Germain believe that this could be a good time to sell Kalimuendo and Leeds are hoping that this is the case and that they can get him on board this summer.

He said: “There are some people there that want him to stay, but ultimately, there are very powerful people that believe that this could be a good moment to cash in.

“So, Leeds are hoping that that’s the one that comes along because he’s a really good young forward.”

Leeds were hopeful of signing highly rated young attacker Charles De Ketelaere this summer, but he opted to sign for Milan amid the opportunity to play in the Champions League, so they have evidently turned their attentions heavily to Kalimuendo.

However, with other clubs showing interest in the young French forward this summer, it might be a similar case to the De Ketelaere situation where another club with a better chance of winning silverware or the opportunity to play in Europe come in for him, which could rule out Leeds’ chances.

Kalimuendo spent last season on loan with RC Lens where he featured 32 times in Ligue 1 and found the back of the net on 12 occasions, but given he may not be expected to feature regularly for PSG this summer due to their deadly front trio, he might want to force a move away from the club on a permanent deal in order to get regular game time.