Rangers: Journalist pleads case for Jon McLaughlin to be made first-choice 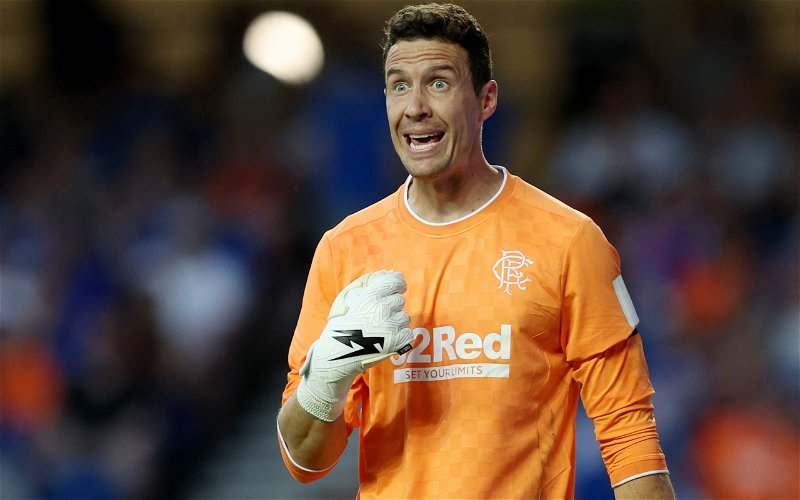 Rangers Review writer Jonny McFarlane has called for Jon McLaughlin to be installed as the number one goalkeeper this season.

McLaughlin who will be 35 in September is a veteran in his own right but since his move to Ibrox in 2020 from Sunderland, the Edinburgh-born shot-stopper has found himself firmly positioned behind club hero Allan McGregor.

He has appeared just 30 times for the Gers, 19 of which have come in the Scottish Premiership but when he played his most recent competitive match at Hampden Park as the Light Blues clinched the Scottish Cup he must have thought the spot would finally be his.

He made way in the closing stages as McGregor came on for what looked to be a farewell to supporters however, after 469 games in goal he decided to extend his stay for yet another year.

The pair have shared responsibility during pre-season but McLaughlin did play the full 90 minutes in Rangers’ impressive 3-1 win over West Ham in the week with McFarlane now pleading for him to become a permanent fixture in goal for Giovanni van Bronckhorst’s men.

Speaking on the Rangers Review YouTube channel he said: “I think Jon McLaughlin, for me, is the number one. I’ve been saying that for six months. I think he just deserves a chance. I think he’s confident with the ball at his feet.

“But I think he needs to be given a chance this season to show that he’s up to the job of being a Rangers keeper.”

TIF Thoughts on McLaughlin and Rangers…

Last season, albeit over fewer outings, McLaughlin showed his superiority with the ball at his feet compared to his goalkeeping rival as he completed nine more passes per game on average and boasted an 88% pass completion rate compared to McGregor with 76% (SofaScore).

The former Hearts netminder also has bags of experience totting up 439 career appearances, the bulk of which (169) have come in England’s League One but he played over 60 times in Scotland having also donned the Hearts jersey and he could finally secure the number one role with the Teddy Bears this term.