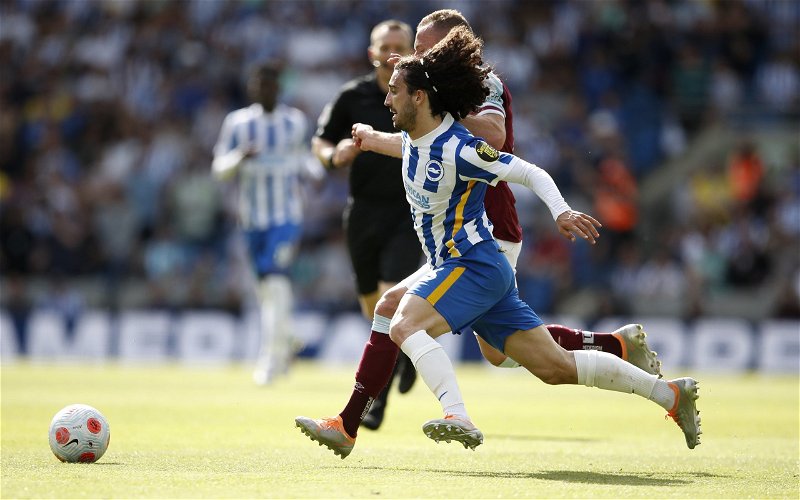 ExWHUemployee has revealed that West Ham United turned down the chance to sign Marc Cucurella before he joined Brighton & Hove Albion.

In a fine debut season in the Premier League, Cucurella took like a duck to water on the south coast and scooped the club’s Player of the Year award following his £15.4m move to the Seagulls just last summer.

However, following the impending exit of Oleksandr Zinchenko, Manchester City are now expected to increase their efforts to lure the Spaniard to the Etihad Stadium for a potential £50m, and amid the speculation, Ex has confirmed that the 23-year-old could well have turned out in a Hammers shirt.

Speaking on The Transfer Show, he said: “Manchester City are stepping up their bid to sign Spanish left-back Marc Cucurella from Brighton as a replacement for Zinchenko, who looks set to be joining Arsenal.

“Both those players have been linked with West Ham before. West Ham turned down a move for Cucurella before he joined Brighton, which was disappointing, and Zinchenko, the wages were said to be too high for him.”

With Rob Newman and his recruitment team actively seeking a left-back as a ‘long-term successor’ to Aaron Cresswell (The Times), refusing to take a chance on Cucurella at a low-risk price in this day and age does appear like a miss, albeit prior to his terrific form at Brighton.

However, the club have got little wrong of late in the transfer market and are aiming to make amends in that department this summer.

Speaking on The West Ham Way podcast earlier this week, Ex stated that the Irons have a list of targets for the left-hand side of their back four, with Filip Kostic of Eintracht Frankfurt and Stuttgart’s Borna Sosa backup options to first-choice target David Raum, currently of Hoffenheim.

Raum is just three months older than Cucurella and broke into the German national side last season after a terrific first campaign in the Bundesliga, where he scored three goals and provided 13 assists – and we feel he could soften the blow of the apparent Cucurella transfer blunder should he arrive at the London Stadium.