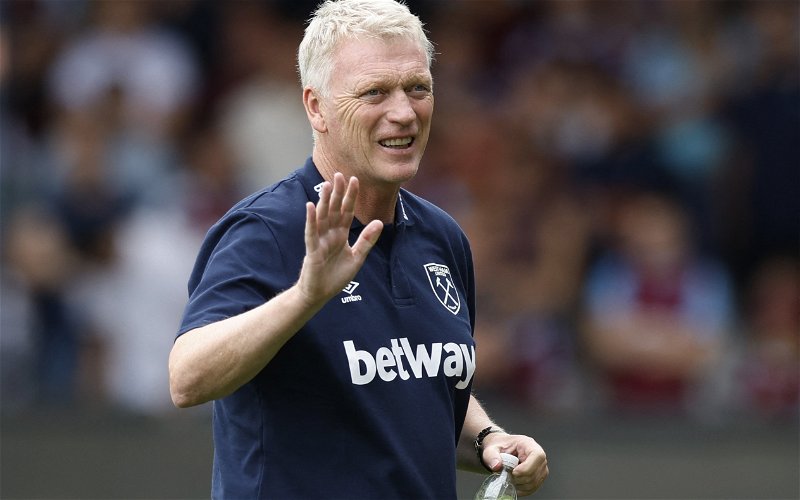 West Ham United could bring in more additions to the London Stadium this summer, with David Moyes looking to bulk out his squad.

That is according to Dharmesh Sheth of Sky Sports, who was speaking to GiveMeSport about the Irons’ summer transfer plans ahead of this season’s Premier League and Europa Conference League campaign.

West Ham have added two new faces to the squad this season in the shape of Morocco centre-back Nayef Aguerd and former Swansea City midfielder Flynn Downes, whilst the club have also permanently signed French goalkeeper Alphonse Areola, who spent the previous season on loan at the London Stadium.

And the club have now also reportedly agreed a fee with Sassuolo for the transfer of striker Gianluca Scamacca to the club for a reported £30.5m plus £5m in add-ons.

And Sheth says he wouldn’t be surprised if the club made more additions to the squad before the transfer window deadline in September:

“You can never rule it out because West Ham have surprised everyone, not least their fans, about how they’ve approached this transfer window and how quickly they’re going about doing their business,” Sheth told GiveMeSport.

“Three signings are already in and there is potential for three or four more. We will still have the best part of five or six weeks left in the transfer window once all of that gets sorted.

“There is still time for West Ham United to do more business.”

We believe that Hammers fans will be delighted to hear that they could be bringing more faces into the London Stadium this summer, even after the potential signing of Scamacca.

The club will need to bring in more depth to the squad this summer, with Moyes potentially juggling another packed European schedule alongside their various domestic commitments.

And we believe that the club will continue to recruit sensibly, with the Irons looking ahead to what they hope will be their third successful season on the bounce.