Newcastle United have made contact with the agent of the Real Madrid forward Marco Asensio with his future in doubt at the Santiago Bernabeu.

Speaking on the NUFC Matters YouTube channel, journalist Ben Jacobs has been discussing the Toon’s potential interest in the winger.

However, reports also claim there is interest coming from Jurgen Klopp’s Liverpool, though neither side are yet to make an official move for the 26-year-old.

Jacobs said: “Unlike one or two others that we’ve spoken about, like [Paulo] Dybala, Newcastle have looked at him [Asensio] over the last few weeks, he’s on their radar.

“No bid has been tabled, no talks have started with Real Madrid. But they’ve definitely connected with his agent to find out the score. And they feel like the player could be open to a Premier League move.

“And the other thing to point out is, contrary to reports, my understanding is that [Liverpool] don’t have any interest in him. So Newcastle wouldn’t be up against a side like Liverpool that had Champions League football to offer. So, it’s something to watch over the course of the window.”

This would feel like another huge addition to the project beginning to unwind on Tyneside, with Asensio a player with huge amounts of experience in winning at the top level of European football.

Do you want to see Asensio signed this summer? 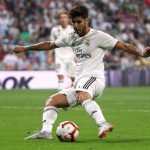 Despite starting just 19 La Liga games over the 2021/22 campaign, the Spaniard was able to return an impressive 10 goals in the league alone (via Transfermarkt).

In comparison, that is eight more goals than Ryan Fraser was able to provide from the right-wing position last season for the Toon.

Journalist Kiyan Sobhani has previously taken to Twitter to hail the Madrid ace, labelling him “truly special” following some of his previous displays.

With clear talent and pedigree at the top of European football, an asking price potentially as little as £21.7m feels like a real bargain to be had this summer.