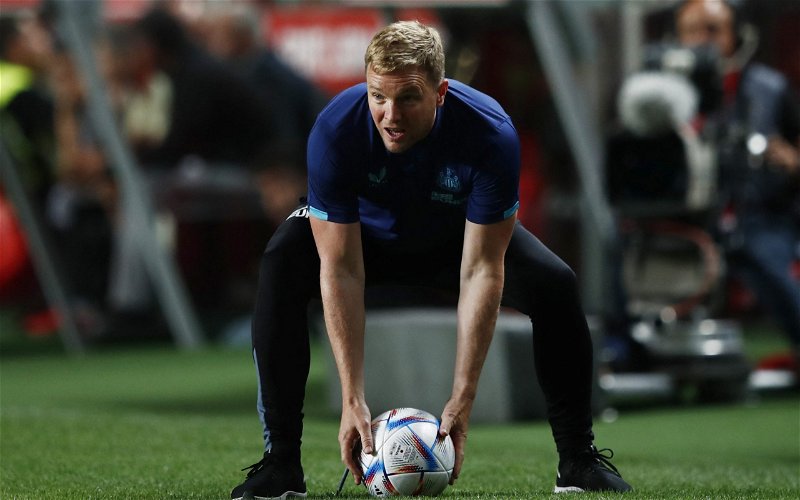 Newcastle United manager Eddie Howe is keen to bring in a young striker to the club this summer.

That is according to Keith Downie of Sky Sports, who was speaking to This is Futbol about the potential transfer activity at St. James’ Park this summer.

It has been no secret that Newcastle have been on the hunt for a striker this summer, with Howe currently having Chris Wood and Callum Wilson at his disposal at the time of writing.

In terms of strikers, Reims’ Hugo Ekitike, Real Sociedad’s Alexander Isak, and Chelsea’s Armando Broja are just some of the names that have been linked with a move to Tyneside this summer.

And Downie believes that Howe is looking for a young striker to complement the services of Wilson and Wood this season.

“I think what Howe was keen to do, and still is keen to do, is to bring in a young striker to work alongside Callum Wilson and Chris Wood.

“Obviously, Hugo Ekitike is 19, Armando Broja is 20 and I think these players fall into that.”

It’s no surprise that Howe wants to add a younger striker to his squad this summer, with both Wilson and Wood at the age of 30.

We believe that if Newcastle were able to recruit a young striker this summer, they would be able to gradually bring them into the side this season, and they could learn from both Wilson and Wood, who have both scored goals on a regular basis in the Premier League, but are both very different strikers.

And we think that Broja or Ekitike would be ideal additions for the Magpies this season, but as we’ve already seen this summer, securing their signatures is much easier said than done.