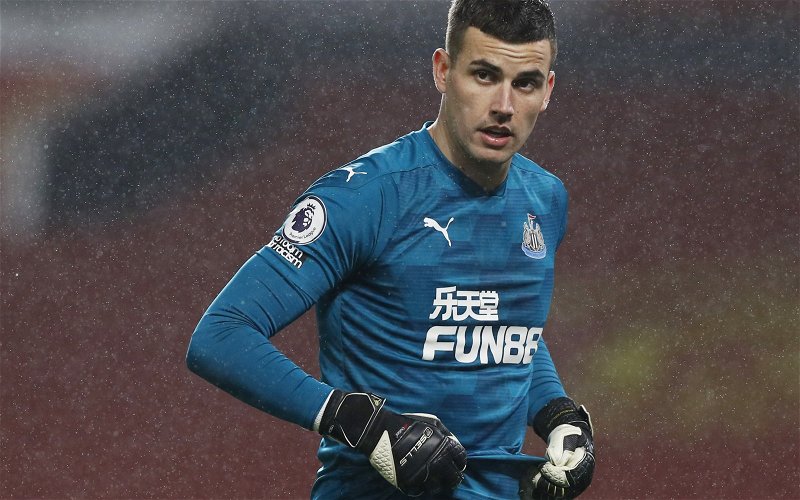 Newcastle United goalkeeper Karl Darlow has been told he still features in Eddie Howe’s plans despite the arrival of Nick Pope from Burnley, according to Sky Sports reporter Keith Downie.

Pope became the Magpies’ second capture of the summer last week, completing a £10m deal to bring the former Charlton Athletic and Burnley shotstopper to Tyneside.

It is widely expected that the England international will challenge Martin Dubravka for the no.1 goalkeeping berth in Howe’s team next term which as thrown Darlow’s future at St James’ Park into much doubt.

According to reports in The Sun, the Toon were prepared to offer Darlow to Manchester United in an attempt to land Dean Henderson, though, that deal is now dead in the water after signing Pope.

Despite the possibility of featuring much less in Howe’s plan next term, with Dubravka and Pope battling it out for the no.1 jersey, Downie reckons the Northampton-born shotstopper still has a part to play for the club next season.

“My understanding is that Karl Darlow has been told he’s got a future at the club, so that leaves a bigger question mark over Martin Dubravka.

“There was a little bit of talk over him leaving in January, but it didn’t materialise at the time.”

Interestingly, Dubravka did hint last month that he could be set to stay at Newcastle, so to now hear that Darlow may now be the back-up goalkeeper is quite surprising.

It is evidently clear that the former Bournemouth boss could have a huge selection headache on his hands at Tyneside with all three goalkeeping options capable of becoming no.1.

However, with Pope expected to carry the first team berth after his signing and proven quality at Turf Moor last season, it could see the futures of Dubravka and Darlow thrown into question, which means both players do have huge decisions to make in the coming weeks.

The 31-year-old, was called upon in eight games under Steve Bruce last season and struggled badly as he conceded 1.9 goals per match in that time.

In order to get back to his best form, maybe a move away may well just do Darlow some good, as he goes in search of some first team football.