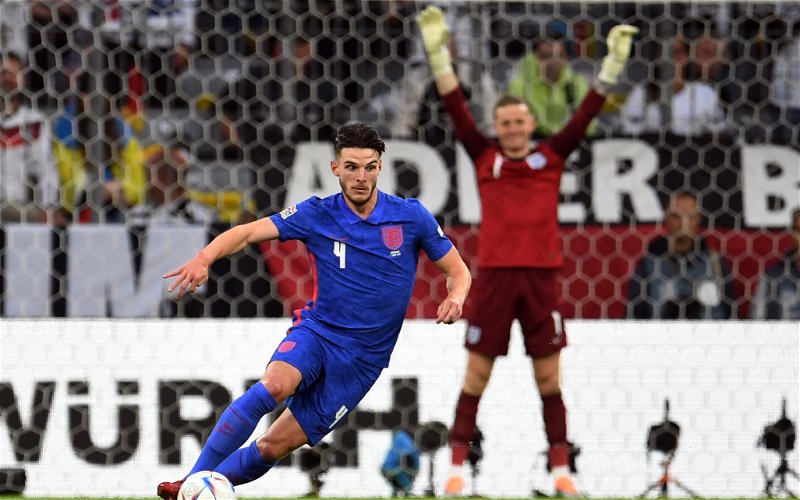 Sky Sports reporter Michael Bridge has insisted that he is “fully” expecting Declan Rice to stay at West Ham for at least another year.

Bridge was speaking on the latest edition of The Transfer Show and eased the fears of West Ham supporters with his comments.

Rice is thought to have a lot of potential suitors with Manchester United and Manchester City thought to be interested while it is thought the 23-year-old would prefer a return to his boyhood club Chelsea, who are also plotting a bid.

The midfielder’s future is still up in the air after he rejected yet another proposal from his current employers which would have seen him commit the next eight years of his career to the Hammers but the Sky Sports man can’t see the Englishman leaving just yet.

He said: “I fully expect Declan Rice to stay at West Ham for another season. I don’t think Manchester United or Chelsea are particularly that attractive at the moment.

The Hammers’ attempts to tie the £62k-per-week star down to a new deal have so far been rebuked but with the option of extending the 2021/22 Hammer of the Year’s current contract until 2025, supporters have no real reason to worry just yet.

Rice has previously told ESPN that he has an “urgent” desire to play Champions League football “as soon as possible” and that won’t be possible at the London Stadium next season so will it be interesting to see how this story develops.

The Irons do hold all the bargaining chips when it comes to any transfer and have placed a £150m valuation on their star man so unless an extortionate bid comes in, Bridge’s comments will likely hold true.