Fabrizio Romano has said on The United Stand YouTube channel that Ruben Neves is still on Manchester United’s radar.

Speaking on The United Stand YouTube channel the transfer guru was discussing the club’s options in midfield and although it is now looking likely that the long-winding Frenkie De Jong saga will draw to a close Romano did discuss other targets that United have in that area should they wish to revamp an uninspiring midfield bereft of any real quality.

With Juan Mata, Nemanja Matic, Jesse Lingard and most significantly Paul Pogba all leaving this summer, Erik ten Hag is going to need to signings in the engine room and wantaway Sport [via Sport Witness] Wolves ace, Neves, has been mentioned as a potential target. 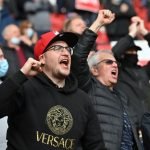 However, Romano has stressed that any potential deal would have to work within United’s current budget which could be an issue given the west Midlanders’ extortionate asking price:

TIF Thoughts on Neves and United…

After 142 Premier League appearances for the Old Gold, the 25-year-old could well be of use to United regardless of whether De Jong arrives or not.

Unlike the Dutch dynamo, he would already be acclimatised to the top-flight of English football and as well as boasting an 84% pass success rate in the league last year he can do the work on the other side of the ball.

An average of 2.1 tackles and 1.2 interceptions per game demonstrates how diligently the Portuguese international carries out his defensive duties and he would certainly be a breath of fresh air at Old Trafford compared to the less influential Fred and Scott McTominay.

And Neves has clearly made a huge impression on those covering Wolves with reliable journalist Tim Spiers recently hailing the midfielder for a recent performance back in March: “Ruben Neves was outstanding. Ran the show. What a guy,” he said.