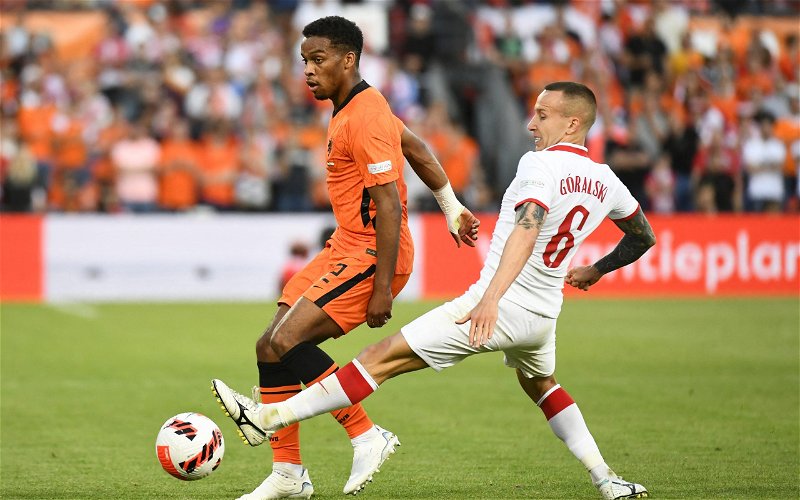 Manchester United target Jurrien Timber would be “happy to join” the club this summer and is “waiting” for the Old Trafford executives to make their move.

That’s according to journalist Fabrizio Romano, who has been speaking on The United Stand YouTube channel about the club’s current transfer plans.

Journalist Jonathan Shrager revealed on Twitter last month that United were the frontrunners in the race to land the ‘magnificent’ Ajax centre-back who starred under new Red Devils boss Erik ten Hag last season, but rumours seem to have gone cold over the past couple of weeks.

Any attempt at a move appeared to be thrown into doubt when the defender hinted in an interview with De Telegraaf that he would be happy to stay put at Ajax where he could play Champions League football, while with the World Cup coming up in November, Netherlands boss Louis van Gaal has publicly urged the defender to stay put, having only broken into the national setup.

However, Romano has eased the concerns of United supporters with his latest comments as he insisted that both Timber and Pau Torres – who has also been linked by Spanish sources (via Sport Witness) – would be open to a transfer.

He said: “For Timber, he’s just waiting for Man United to update him on the situation with Ajax, so I’m sure that is not a player’s problem. Both players would be happy to join Man United.”

Romano did emphasise throughout the interview with The United Stand that any further deals for the English giants will hinge on the potential deal for Frenkie de Jong as the club look to allocate their budget accordingly.

However, given the previously reported £36m asking price, surely that is a figure worth investing given the potential of a long-term investment that Ten Hag will know plenty about already.

United finished with their lowest-ever points total in the Premier League last season and their goal difference of zero was a particular cause for concern considering their sixth-place finish, with the poor form and lack of a clear defensive pairing in the heart of the United rearguard contributing to their downfall.

But adding a staple from Ten Hag’s title-winning Ajax team seems like smart business for the Red Devils and is something they should be looking to get over the line sooner rather than later, especially if the player is open to a move.