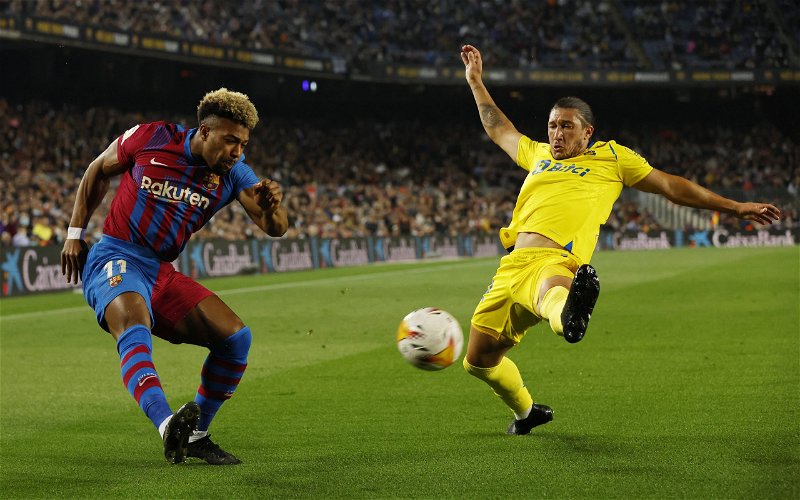 It has been claimed that Leeds United are ‘looking at trying to sign’ Wolves’ Adama Traore.

Speaking on The Transfer Show, noted insider ExWHUemployee discussed the latest transfer news around the Premier League and gave his take on Traore’s mooted switch to Yorkshire.

The winger has been linked with a move to Elland Road in recent days, and according to Football Insider, the Old Gold would be willing to part with the 26-year-old in order to fund additional arrivals this summer.

Traore spent the second half of last season on loan at Barcelona but failed to score during his time there and is set to return to Molineux this summer, with the La Liga giants choosing not to exercise their option to buy, although the report from Football Insider does state that it could take just £18m for Bruno Lage’s side to let the winger go.

In 154 appearances, the Spaniard contributed to just 11 goals and 18 assists, but Ex thinks it could be a smart piece of business if Leeds were to bring him in.

He said: “Adama Traore is an interesting one. He’s got Leeds now looking at trying to sign him. He was on loan at Barcelona last year; Leeds now looking to bring him in. I think he’d be a good signing for them if they can get the attitude and get him performing to the best of his abilities.”

TIF Thoughts on Traore to Leeds…

Primarily used on the right, the 8-cap Spain international could be drafted in to cover the loss of the seemingly outbound Raphinha.

Director of football Victor Orta was responsible for bringing the ‘dynamic’ forward – as praised by Tim Sherwood – to Middlesbrough from Aston Villa in 2016, but his performances in recent seasons pale in comparison to that of the Brazilian.

He has scored just eight goals in 160 Premier League matches – a tally which Raphinha bettered last term alone, scoring 11 times in 35 matches as he played an integral role in Leeds’ bid for survival.

It will be hard for any individual to match the influence of the Whites’ star man, but whether Traore – who was called a ‘very special’ player by Nuno Espirito Santo – has enough to fill the void is considerably doubtful.