Journalist James Marshment has claimed that Leeds United director of football Victor Orta loves Adama Traore amid transfer links.
According to a recent article by Graeme Bailey (published on TEAMtalk), the Whites are keen on making a move for the Wolves man who spent the second half of last season out on loan with Barcelona but has now returned back to England.
The article goes on to explain that the 26-year-old will not sign a new deal at Molineux and has been seeking an exit for some time now, which has left Leeds on high alert amidst reports that he would only set them back £20 million.
Speaking about the claim on the JUSTJOE FOOTBALL SHOW, Marshment – who is the editor at TEAMtalk – explained that Bailey’s information wasn’t just ‘plucked out of the air’ and that Orta really is keen on making a move for Traore.
He said: “I know Graeme really, really well. And he’s got a massive contacts book. He knows loads of players, loads of agents and a few directors of football, not naming names, not to give anything away. But he knows for a fact that Victor Orta loves Adama Traore.”
Marshment went on to add: “It’s one that I could see happening just because of the Victor Orta connection. I could genuinely see that happen. And when Graeme Bailey tells us something, it’s with good reason. It’s not just plucked out of the air, he will have been told something.” 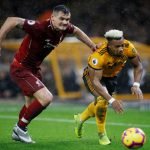 Having claimed two assists in his first two La Liga outings during his loan spell last season, Traore made a quick start at Barcelona but faded fast. Indeed, after that he failed to provide any further goal contributions in the league.

Barca clearly did not feel as though he did enough to force a permanent switch and so the Spaniard has returned back to Wolves, but with the intention to find a new club – if the aforementioned reports are to be believed.

It remains to be seen as to whether or not Leeds try and make a move for the winger – and if Traore would be keen on joining the Yorkshire outfit – but if Orta really does ‘love’ the player, this possible transfer certainly looks like one to keep an eye on over the coming weeks and months.