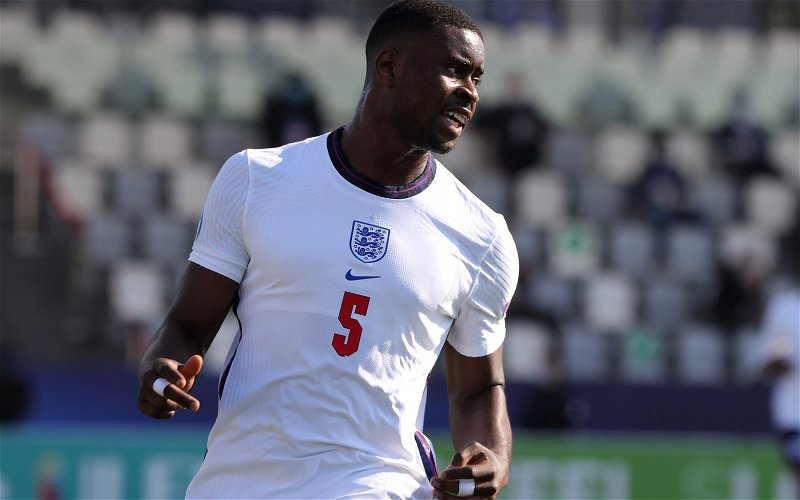 HLTCO podcast presenter Dan Cook has revealed that he thinks Marc Guehi will become the new Crystal Palace captain come the start of the season.

Speaking on the latest episode of the podcast, Cook heaped praise on the defender and is predicting a bright future for the 21-year-old.

Luka Milivojevic is the current holder of the armband at Selhurst Park, but having been limited to just 15 Premier League appearances last term, his leadership wasn’t always displayed on the field.

With the 31-year-old heading into the final year of his contract, the Eagles may decide to relieve the Serbian of his duties. and Cook thinks he knows the ideal candidate to succeed him.

Speaking on Guehi’s credentials, Cook said: “He’s pretty much nailed-on, in my opinion, to become the official club captain going into the new campaign. He’s been given his full England debut and he’s one of, if not the first name on the teamsheet, really, for Patrick Vieira.

“I honestly believe that Marc Guehi is still criminally underrated by many people.

“He is someone that has taken to Crystal Palace and to regular Premier League football like a duck to water, and I would imagine he will only go on to improve over the next few years and become an even more adept central defender.

“For me, he is someone that you can give the armband and look to build the entire team around, really, with him as the focal point at the heart of the back four.”

TIF Thoughts on Guehi at Palace…

Last season, only Conor Gallagher, Wilfried Zaha and James McArthur posted a higher average match rating across 30 games than Guehi (WhoScored) as he emerged as Patrick Vieira’s first-choice centre-back and made more appearances than any of his teammates, playing 90 minutes in all but two of the club’s 44 matches, scoring four times for the Eagles.

The 3-cap England international is reportedly a target of Tottenham Hotspur after a fantastic maiden season in the top-flight and he is sure to attract more suitors, while his selection for the captaincy remains to be seen.