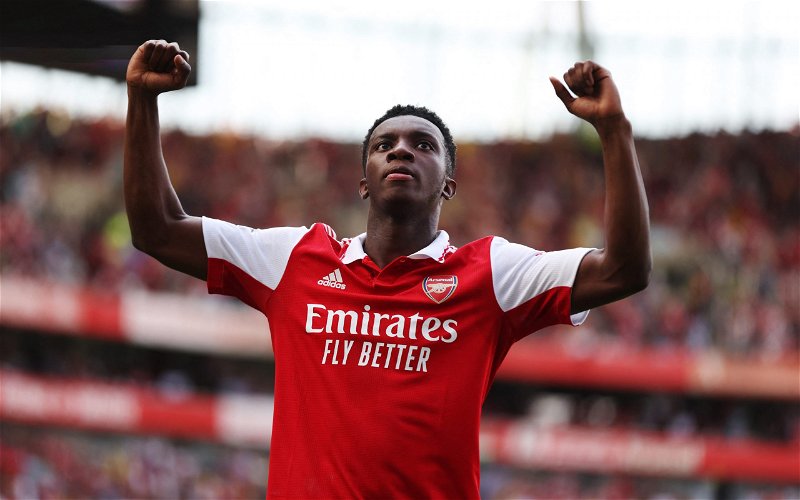 Goal’s Arsenal correspondent Charles Watts is still convinced that Eddie Nketiah will remain at the club.

Watts was speaking on his YouTube channel following an official announcement from the Gunners on their out-of-contract players.

Only two of the five names released were senior first-team members, with the obvious one being Alexandre Lacazette. But alongside the departing French striker was Nketiah, with a sidenote reading: ‘contract offered, ongoing discussions.’

The journalist has stressed, however, that the 23-year-old is still likely to put pen to paper on a new deal at the Emirates Stadium, just as was reported by The Athletic back in May.

He said: “My understanding of the situation when it comes to Nketiah – it’s progressing pretty well. I don’t think anything has changed.

“Obviously, until it’s signed, you can’t say for 100% certain that he’s going to stay, but even yesterday [Thursday] I was talking to someone at the club and the signs are that they’re going pretty well and they do think Eddie Nketiah will commit his future to the Arsenal.”

TIF Thoughts on Nketiah and Arsenal…

Watts’ comments will help ease concerns as one would wonder if perhaps the London-born frontman is waiting to see if Arsenal bring Gabriel Jesus to the club as has been heavily reported.

However, the Brazilian can play on the right-hand side where Bukayo Saka operates although with European football now to contend with there would be plenty of game time for Mikel Arteta to accommodate his forward players.

Nketiah stepped up with five goals towards the end of the campaign emerging as a talisman for the Spanish coach but you would think he would like to be guaranteed game time before committing to a new contract so it will be interesting to see how this develops and whether he does decide to leave, with Crystal Palace thought to be waiting in the wings.