The Brazilian has been the subject of much interest in recent weeks after enjoying two spectacular seasons in the English top flight.

Since joining Leeds United in 2020 from Ligue 1 outfit Rennes for £17m, the Brazil international has been nothing short of sensational for the Yorkshire club. 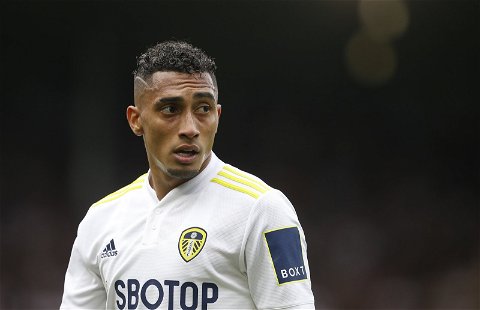 The 25-year-old has proven to be very effective in the final third, having amassed 17 goals and 11 assists across 66 outings in England, earning a first call-up for his national team during this time.

After narrowly avoiding relegation from the Premier League on the final day of the 2021/22 season, it has appeared as though a move could be in the offing for some time, with north London rivals Arsenal and Tottenham Hotspur both linked with the player, as well as the likes of Liverpool and Barcelona.

And Watts has insisted that Arsenal remain interested in the former Rennes man, but before any deal can be done, the Gunners will have to move through certain hurdles.

Speaking on Mikel Arteta’s interest on his YouTube channel, he said: “I’m told it’s absolutely genuine and Arsenal are very much are interested in Raphinha. If there is a deal to be done this summer, they will try to do it. It is just a case of everything falling into place with what happens with Barcelona, what happens with Nicolas Pepe.

“As usual in the transfer window, all things are pretty complicated.”

TIF thoughts on Raphinha to Arsenal…

Raphinha is undoubtedly a wonderful player to watch – he was hailed as a ‘magician’ by Leeds teammate Dan James and a ‘storm’ by goalkeeper Illan Meslier – and looks like he will have a spectacular footballing career wherever he ends up in the near future.

A move for the Whites star could be a brilliant one for the Gunners and just what Arteta needs ahead of the new season, as he would significantly boost their impressive and exciting attacking weaponry and acquire a considerable upgrade on Nicolas Pepe in the nine-time Brazilian international, with the Ivorian potentially moving on.

The £40.5m-rated wizard almost singlehandedly kept his team in the Premier League last season with 11 goals and three assists, and has impressively shown that he is indeed one of the league’s most efficient attackers – he ranked seventh in the Premier League for key passes (65) and ninth for shot-creating actions (119) (via FBRef), highlighting his stunning influence when forming opportunities for his teammates.

Arteta could well pull off a statement move by bringing in the Porto Alegre-born superstar.