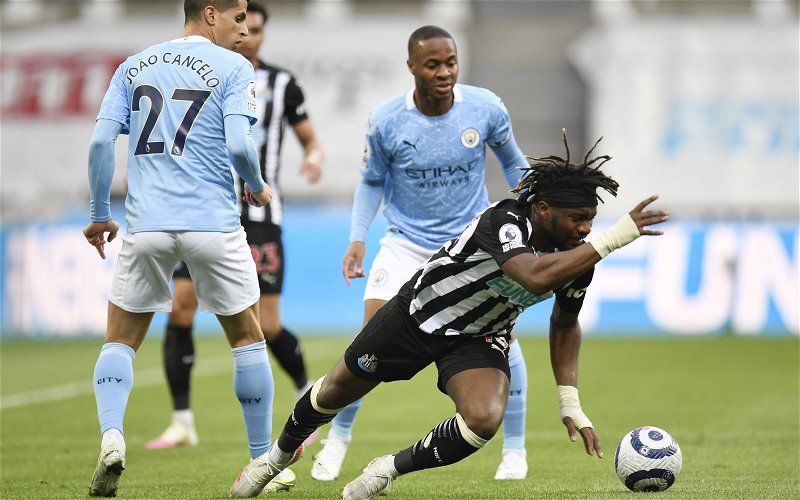 Newcastle United pulled off a stunning 2-0 victory on Monday night against Arsenal in what was their final home game of the 2021/22 campaign.

It was an almost faultless performance from Eddie Howe’s men, who put the Gunners to the sword and put the Gunners’ hopes of a spot in the top four in serious doubt.

Should ASM be sold this summer?

However, it was apparent Newcastle journalist Lee Ryder was not fully convinced by the performance of Allan Saint-Maximin in the game on Tyneside.

Saint-Maximin was making his 34th Premier League appearance of the season, in which he has been able to provide his side with five goals and four assists (via Transfermakrt).

But Monday night was evidently not his finest display in a black and white shirt, with Ryder awarding him with a 7/10 rating in his article for The Chronicle, saying: “Not his best performance of the season but had Arsenal on the back-foot.”

It certainly wasn’t the best of nights for Saint-Maximin, who recently suggested in an interview that he would improve with better players around him.

And on Monday night he had Callum Wilson back up top, however, he was unable to provide a goal or assist for Howe – although he did play a big role in the first goal.

The Frenchman ended the game with just 31 touches of the ball – Wilson was the only outfield Newcastle player to record fewer – and lost possession eight times, but his lack of defensive input is a real concern, with no tackles, clearances or blocks to his name (via SofaScore), so we can see why Ryder was perhaps left wanting.