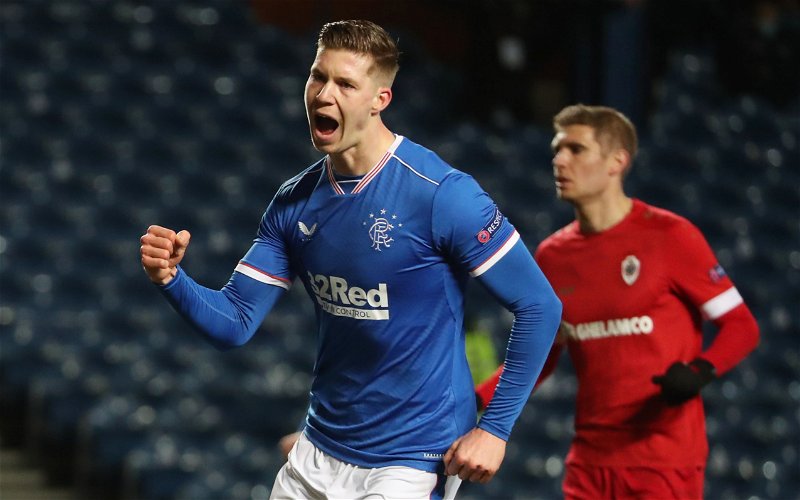 Former Rangers striker Andy Little feels that Cedric Itten may have played his last game for the club.

The Swiss forward scored for the Gers in their final league game of the season as Giovanni van Bronckhorst rang in the changes ahead of the Europa League final.

He made 10 alterations for the trip to Tynecastle as the Light Blues closed out their Scottish Premiership campaign with a 3-1 win over Hearts.

With Wednesday’s mammoth clash looming, the manager offered the fringe players of his squad some game time but Little doesn’t think we will see much more of Itten in a Rangers jersey.

Speaking on Rangers TV at the weekend, he said (via Ibrox News): “Might be one of the last times we see Cedric Itten in a Rangers shirt.

“Who knows what will happen… he certainly hasn’t been in the manager’s thoughts.

“I think he should feel a little bit aggrieved because I think Cedric Itten, he’s scored goals throughout his career when he’s been given chances.

“His stats must be really, really high.

“He gives you something different, he just hasn’t had a lot of joy and a lot of game time.”

TIF Thoughts on Itten and Rangers…

The 6ft 2in frontman was signed by Steven Gerrard in the summer of 2020 on a four-year contract, but his stay in Glasgow could be cut short.

After six goals in 37 appearances last season, the 25-year-old was shipped out on loan to German side Greuther Furth for the first half of this campaign.

After just four minutes of Scottish Premiership football since February prior to this weekend, the £2.7m-rated forward started and played the entirety of what could be his final game for the Gers.

With a total of just eight goals in Glasgow, the striker has failed to put up the numbers that would see him challenge Alfredo Morelos or Kemar Roofe at the top of the pitch, and with Van Bronckhorst now in the dugout, he could be on his way out despite what Little has said about his stats.

AND in other news, “It would be a huge boost”: Journalist makes huge Rangers prediction amid UEL final