Celtic managed to secure the title and take it back off of their city and league rivals with a 1-1- draw away to Dundee United meaning that Postecoglou has managed to pull off an impressive domestic double in his first season as Celtic manager. 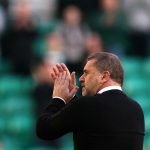 The Bhoys have been pushed the whole way by Rangers but Postecoglou’s achievement in the league shouldn’t go unrecognised given that he’s seen 17 players arrive at the club this season as well as 16 depart, all while reclaiming the league title back.

Postecoglou was not everyone’s cup of tea when he arrived in Glasgow, with Alan Brazil saying live on TalkSport: “Is this a wind-up? Where do they come up with these guys from?”

And it’s apparent Sutton hasn’t forgotten, as he quote tweeted with a replaying reading: “No it’s not a wind-up… Are you still wallowing Ally???”

It is very impressive what Postecoglou has managed to do, overhaul a Rangers side that finished 25 points ahead of Celtic last season as well as beating them twice in all competitions this season, showing that the momentum is certainly back on the Bhoys side.

The Bhoys will be hoping that their Australian boss can continue working his magic and next season take them on leaps and bounds in Europe as that is the only slander that could be put towards Postecoglou as he saw his side crash out of the Europa League groups stages and then knocked out of the Europa Conference League by Bodo/Glimt.

In other news: Spotted: Celtic fans will love what McGregor was seen doing at Lennoxtown – opinion