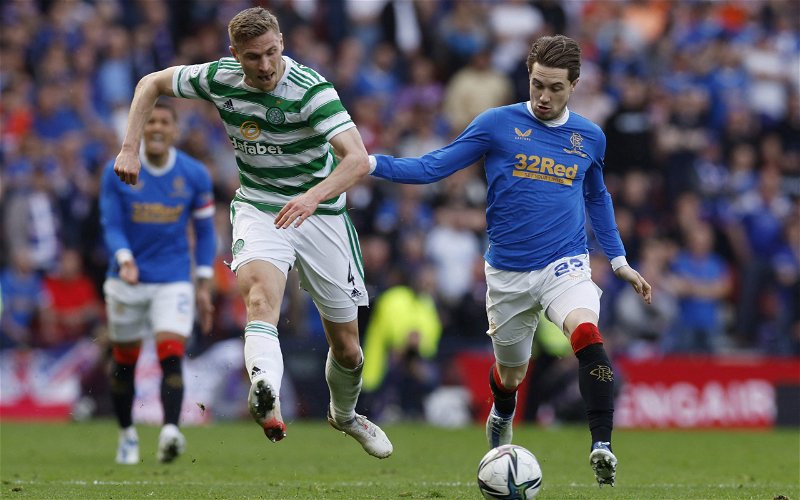 Content creator Chris Hamill, who gets featured on Sky Sports, lauded Carl Starfelt for his performance in the Old Firm derby on Sunday.

The Swede has made 46 appearances this season and has become a key figure in the Celtic team averaging a 7.23 SofaScore rating for the season.

Starfelt played the full 90 minutes against Ranges as the Hoops moved to the brink of the title with a 1-1 draw at Parkhead on Sunday.

Jota may have scored the all-important opener for the Celts and goalkeeper Joe Hart did make three saves from inside the box to keep the sides level but Hamill was left astonished by the £3.6m-rated colossus for his performance in defence.

Taking to Twitter, he enlightened followers with the 26-year-old’s defensive statistics which included eight clearances and eight headers won.

TIF Thoughts on Starfelt and Celtic…

Celtic paid £4.3m to the Russian side Rubin Kazan to acquire the Swedish international last summer, a considerable fee north of the border, but it looks to be a bargain so far, and he could be a mainstay in the side for years to come.

He ranks first for interceptions (1.3) among players who have made 10 or more appearances for the club this season and second for clearances per 90 minutes with 3.6.

With Ange Postecoglu’s side needing just four points from their final three games to be confirmed as champions, one would feel that Starfelt’s presence at the back has been paramount to their resurgence this term.

AND in other news, Clueless: John Beaton made embarrassing Celtic error as image emerges – opinion