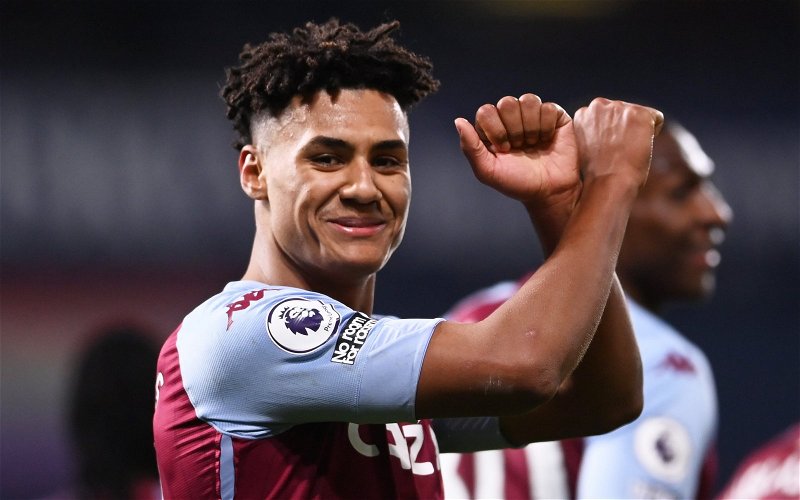 Presenter Dan Lawless as hit out at West Ham for considering a £50m offer for Aston Villa striker Ollie Watkins.

The Guardian reported on Tuesday (May 10th) that Hammers boss David Moyes had identified Watkins as a potential summer target as he looks to bolster his ranks in attack.

It suggested that the east London club had “explored the possibility” of signing the 26-year-old and despite there being talk of Steven Gerrard allowing the player to leave, Villa would “demand at least £50m”. 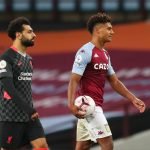 The price tag could be off-putting for sure and it led to Lawless’ Twitter post yesterday saying the club would be ‘crazy’ to meet those demands: 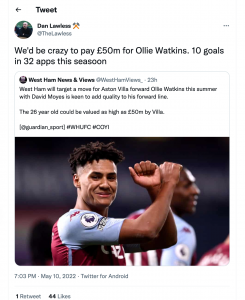 Watkins’ ten-goal tally would put in fourth in the list of West Ham’s top-goalscorers this season and in significantly less appearances given the long European season at the London Stadium outfit.

The club’s only senior striker Michail Antonio has been struck with persistent injuries over the course of his career and the continued reliance on his availability across all domestic and European competitions has seen his form suffer, with the Jamaica international finding the net only three times in 2022.

Speaking on The West Ham Way podcast in April insider ExWHUemployee has revealed that the search for a marquee forward is already underway with the Hammers yet to replace Sebastian Haller who left the club almost 18 months ago.

Two transfer windows have past and the Irons have failed to bring in a striker but it is clear they will need one although it remains to be seen whether Watkins is the man to lead that line.

AND in other news, ‘I know we value that’ – Ex names WHUFC target as GBS and Moyes agree on plan