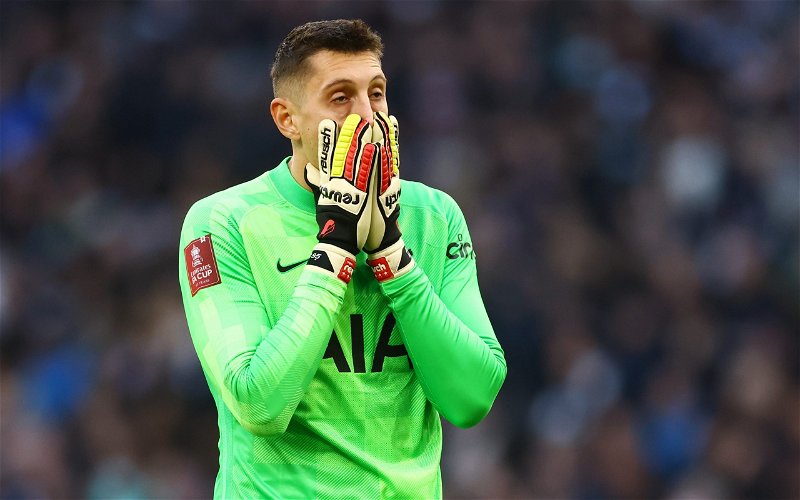 Pierluigi Gollini could be on his way out of Tottenham Hotspur, according to Sky Sports reporter Michael Bridge.

The £9m-rated goalkeeper arrived at Hotspur Way on loan at the start of the season but is expected to return to his parent club, Atalanta.

The Italian was brought in with the hope that he could succeed Spurs captain Hugo Lloris, however, he hasn’t exactly enjoyed his spell in north London, making just 10 appearances.

The last of those came back in January against Chelsea in the semi-final of the Carabao Cup but it was his error that allowed Antonio Rudiger to pounce and put the Blues in the final at Spurs’ expense.

With Sam Johnstone very much on the Tottenham radar, the 27-year-old is expected to leave the club when his loan deal ends even though he is thought to be a hit amongst his teammates.

Bridge told GiveMeSport: “What I do know about Gollini is that he’s immensely popular in the squad, but that shouldn’t make any difference when you’re trying to build a better squad.

“I don’t know whether that will make him stay, but if Tottenham are in the Europa League next season and Lloris doesn’t play in any of the group matches, you want a good goalkeeper, and for me, I’ve only seen him four of five times, but Gollini has shown nothing to suggest that he’s anywhere near the level of Hugo Lloris.”

At 35, Lloris isn’t going to be about for much longer and having tried Michel Vorm and Joe Hart as well as Gollini, perhaps Spurs can ensure that the future of their No 1 jersey is in good hands by signing 3-cap international Johnstone.

The Englishman is out of contract with West Brom this summer, with The Times labelling Spurs as the ‘frontrunners’ to secure his signature.

Last season, during the Baggies relegation from England’s top flight, the shot-stopper’s performances were dubbed “unreal” by Paddy Kenny, while he made the most saves in the league (166) and kept six clean sheets.

With no transfer fee to pay out, Antonio Conte could allocate funds elsewhere to strengthen his side while also guaranteeing a seamless changeover between the sticks.