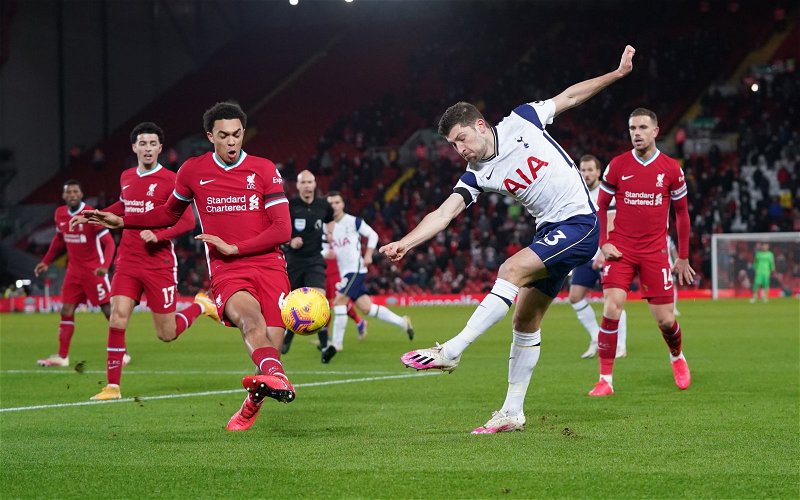 Tottenham Hotspur defender Ben Davies has been hailed for his second-half performance in Thursday night’s north London derby by Antonio Conte after a brief chat.

The Lilywhites gave their top-four chances a huge boost on Thursday night as they put bitter rivals Arsenal to the sword, comfortably winning 3-0 thanks to two goals from Harry Kane and one from Son Heung-min. The win puts them just one point behind the Gunners with only two games left, and an easier run-in than their rivals.

While Kane and Son shone with their attacking prowess and goals, it was Spur’s stellar defence that managed to keep Arsenal out of the game throughout the 90 minutes and according to manager Conte, makeshift centre-back Davies was a key figure in the win.

During an interview after the game, Football London reported the former Inter Milan manager hailed Davies for his second-half performance and his ability to manage the rest of the game even against the 10 men of Arsenal after putting in a sneaky word at half-time.

He stated, ” To see my players manage this, what happens when there is a red card on the other side you have to pay more attention especially when they have one yellow card. We spoke with Ben after the first half to pay attention. I am delighted with the way they managed and the attitude they showed”.

Davies shone during the North London derby on Thursday night despite picking up an early yellow card and therefore needing to be smarter and more reserved in his challenges for the rest of the game.

According to Sofascore, the Welshman scored a 7.2 match rating with two clearances and interceptions, one tackle, and one blocked shot. He also managed to win two of his three ground duels and two of his three aerial duels. Davies also played well with the ball, completing 64/72 passes at 89% with one key pass and one long ball to his name.

Spurs still have two important games to play against Burnley and Norwich and will need all six points to give themselves a chance of finishing in the Premier League top four. While Kane and Son will do the work up the pitch, they will need the likes of Davies to keep this high level of play in order to keep the goals out of their own net.