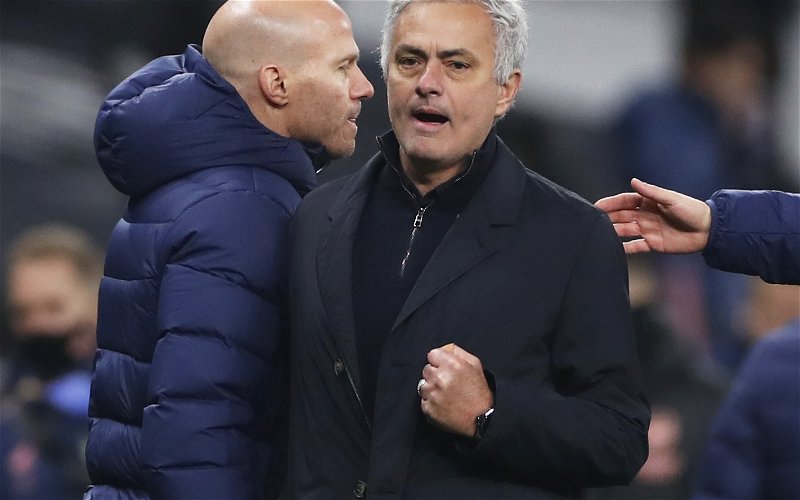 Former Tottenham Hotspur boss Jose Mourinho has taken a dig at his former boss at the North London club, Daniel Levy, during a recent press conference ahead of his Europa Conference League semi-final second leg.

Mourinho was sacked by the Lilywhites back in April 2021, just 17 months after taking over at the club and taking them to the Carabao Cup final, which the Portuguese manager was not able to take charge of. Since then he has gone on to manage Roma in Serie A where he has taken them to potential European glory as they are currently facing Leicester City in the Europa Conference League semi-final.

During the build-up to the game, Mourinho was interviewed in his pre-match press conference where he was asked about his desire to win the competition and managed to aim a dig at his former employer in the process.

“If the next one is a semi-final, even more, because of course a semi-final gives you the right to play a final – if you are not sacked before the final.”

It has been highly debated whether Levy’s decision to sack the legendary manager prior to a final he led his team top was right, as Mourinho said getting to a final surely gives your the right to play that final.

Instead, Levy placed unproven manager Ryan Mason in charge of the game where they were outplayed and eventually beaten by English powerhouse Manchester City.

Who knows what would have happened in Mourinho was in charge, there’s every probability that they would have succumbed to the same defeat, but surely going in with a manager who has won multiple league titles in England, Italy and Spain as well as a Champions League and Europa League title would have given them a greater chance at overturning City.