Tottenham are preparing for a must-win north London derby at home to Arsenal on Thursday night.

Although they earned a credible point at Anfield against Liverpool last Saturday night, the Whites are now four points behind their rivals in the race for fourth place.

Even a win at the Tottenham Hotspur Stadium would leave it out of Conte and his side’s hands but it would certainly put the pressure on Arsenal heading into the final two games of the season and they seem united and determined to do just that.

The manager’s post on Instagram shows him shaking hands and patting the backs of Harry Kane, Steven Bergwijn, Emerson Royal and Cristian Romero as they warm up inside the club’s training facility at Hotspur Way with the message ’Unitl the end’ signifying that they haven’t give up hopes of securing Champions League football just yet. 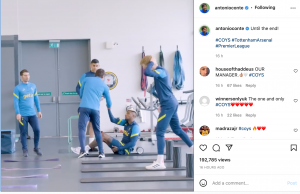 TIF Thoughts on Conte and Spurs…

The 2016/17 Premier League title-winning manager at Chelsea joined the north Londoners back in November on an 18-month deal and after dismissing ‘fake’ links between him and the PSG job it seems as if the harmony between the club and coach is only getting stronger.

He arrived with the side in ninth place in the league after five successive defeats and looks intent on running Arsenal to the wire for that fourth seat at Europe’s top table.

The 52-year-old has already started to put his stamp on the side letting five players go and bringing in two players, Rodrigo Bentancur and Dejan Kulusevski, from his former club Juventus and the squad will only be enhanced in the next window so gaining Champions League football would leave the club in a great place come the start of the 2022/23 campaign.

In other news: ‘Could be on his way’, ‘Very soon’ – Rob Guest now hints Spurs could target ‘one of the best’