Dean Jones has been speaking on the Chasing Green Arrows YouTube channel about the future of Southampton manager Ralph Hasenhuttl.

It’s been an interesting season for Southampton, who have beaten the likes of Tottenham Hotspur and West Ham United this campaign and also managed to reach an FA Cup quarter-final, however, in more recent times, they have a very poor record winning just once in their last 12 matches. 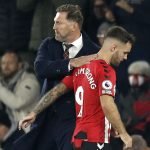 Earlier in the season, Hasenhuttl was even being discussed as potentially becoming the new Manchester United manager, but with the Saints only just mathematically safe from the drop into the Championship, those links appear to be a distant memory.

Due to these results and the club having new owners, the manager’s future appears up in the air, according to Jones.

He said: “Hasenhuttl has been spoken about generally in glowing terms, like people talk about him as the new Pochettino or whatever, but from people I’m speaking to, I’m not even sure he’s in charge of Southampton by next season. They do actually need to end well.”

Southampton may have avoided the heat of a relegation battle, but they could have been in further trouble and put more doubts over the future of Hasenhuttl if it wasn’t for Player of the Year nominee James Ward-Prowse, who’s got 10 goals and eight assists this campaign.

Hasenhuttl has been with Southampton for just over three years now, with their highest-ever league finish under him coming in the 2019/20 season which was 11th, so the fact that they’ve not been able to crack into the top half of the league will likely raise questions, especially with the Saints now under new ownership.

In other news: ‘Despite the new investment…’ – Journalist issues worrying Southampton claim