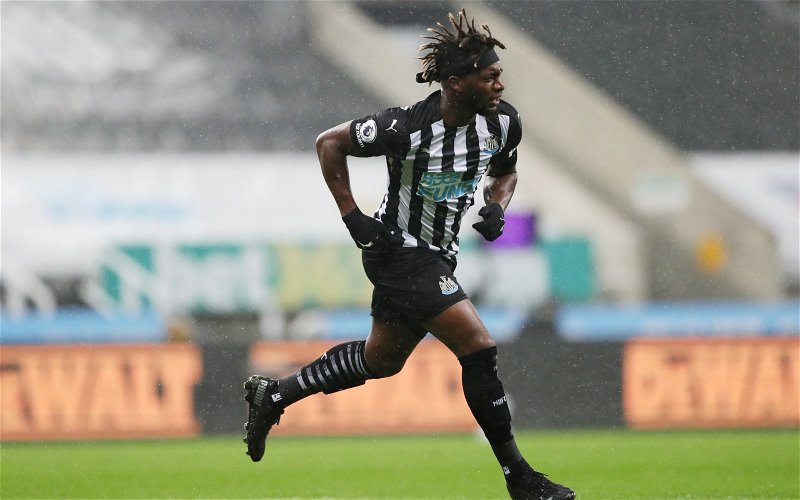 Alan Shearer slammed Allan Saint-Maximin on Match of the Day 2 for his role in the first goal Newcastle United conceded yesterday.

Saint-Maximin was in the headlines on Tyneside for all the wrong reasons in the build-up to their match against Manchester City as he was quoted as saying that with better teammates he would have at least 15 assists in the Premier League.

Would you sell Saint-Maximin this summer?

Eddie Howe later confirmed that the matter had been spoken about between him and Saint-Maximin, but it likely won’t be forgotten by fans in a hurry, especially if his performances on the pitch don’t pick up with just one goal or assists in his last 13 matches.

Nevermind his attacking output, Shearer was fuming with Saint-Maximin for his lack of effort when it came to tracking back as he decided to not follow Joao Cancelo into the box, although the strike went over the bar, although Shearer was still less than impressed.

(16:25) “When you’ve got players with great ability, you can’t afford to make any errors you can’t afford to let them go and when Saint-Maximin is playing on that left-hand side as he did today [Sunday] and not given a free-roll, you cannot allow that.

He has a look at him, he knows he’s there, they had a warning, but he does nothing about it, doesn’t bother to get back in and you have to do that you’ve got to get in and that should have been in the back of the net, that was a warning.”

However, Saint-Maximin didn’t heed this warning that he had to stay tight and close with Cancelo when on defensive duties as later in the half Cancelo nipped in behind the French winger who switched off and teed up Raheem Sterling to score the opening goal, something Shearer went on to analyse.

(16:40) “A few minutes later exactly the same thing again, and he goes to sleep and he lets him get inside of him and he can’t do that, I don’t know what he’s pointing at, but that’s his man.”

While Saint-Maximin is electric going forward on his day and has provided the Magpies with some important goals and assists this season, nine involvements in total, as well as progressing the ball forward the most, but his lack of defensive numbers are alarming.

Saint-Maximin has only made nine tackles all season and one against an opponent who was dribbling towards him (FBRef), which sees him rank way down the squad list so it’s no surprise to see him switch off in a seemingly unusually position back in his own final third, but hat’s no excuse for not carrying out simple instructions to track and mark a specific player.

In other news: Wasn’t punished: VAR may have made big Newcastle error after Man City footage – opinion