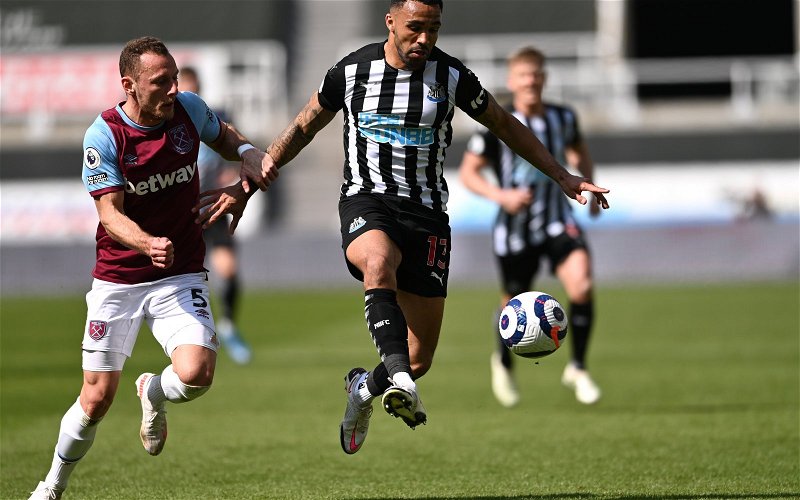 Callum Wilson has admitted on the Footballer’s Football podcast that he’s kept something in store for Newcastle United’s final game of the season.

Wilson made a solid start to life back in the Newcastle lineup on Monday as he captained the side at St James’ Park and was a problem for the Gunners all evening, so much so that Ben White was forced to put the ball into his own net to stop the striker scoring.

Should Wilson stay at Newcastle?

It wasn’t all smooth for Wilson though as he almost lost his front tooth which was pictured to be hanging out during the first half and didn’t manage to get on the scoresheet despite coming close on two occasions in the second 45 minutes.

However, Wilson has sent a message to Burnley and Newcastle fans that he’s keeping his goalscoring touch for Sunday’s final game.

“I could never have claimed it [own goal on Monday], but that’s why I was trying all sorts – shooting from everywhere, to try and make sure I got on the scoresheet. It wasn’t meant to be, but we’ll save it. We’ll save it for next weekend, hopefully.”

Despite missing 20 games in the league this season, Wilson is still Newcastle United’s top scorer with six strikes in the Premier League, which shows how important he is to the side when he can remain fit.

Wilson will be looking to end what has been a poor personal season on a high note this Sunday, as well as proving a point to Eddie Howe and PIF that he can be the man to lead the line heading into next season, amidst links to the likes of Dominic Calvert-Lewin and Hugo Ekitike.

In other news: George Caulkin reveals what happened behind-scenes that NUFC ‘players loved’