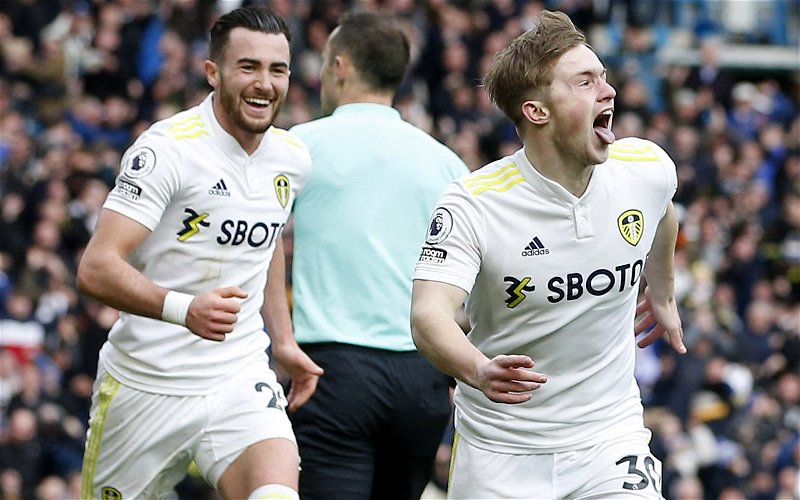 The Athletic’s Leeds United writer Phil Hay has called for the club to ensure they retain Joe Gelhardt – as he believes Raphinha and Kalvin Phillips could leave even if the Whites escape relegation on Sunday.

As Leeds look to extend their stay in the Premier League, reality has set in among United supporters.

A return to the Championship is a very possible outcome this weekend and that would be sure to spell the end for Phillips and Raphinha at Elland Road with the duo linked with exits in recent times.

There have been some expensive signings made by the club since promotion from the Championship back in 2020, with the likes of Diego Llorente, Robin Koch, Dan James and Rodrigo all coming in – and the club could be forced to sell more of their key players should the worst-case scenario come to fruition.

Hay believes the duo’s future will come into question regardless of their fate come Sunday evening.

Speaking on The Phil Hay Show, he said: “[Gelhardt’s] somebody that they have got to keep. I think if they go down, and even if they stay up, you’ve got to ask the question about Raphinha and Phillips now.

“I don’t see any way in which Raphinha stays if they go down. I just can’t see what’s in it for Phillips being here, either. But somebody like Gelhardt, as young as he is and as talented as he is, he’s got to be right in the thick of it.”

TIF Thoughts on Raphinha and Phillips’ futures at Leeds United…

You can see why Hay believes both players could be coming to the end of their careers at Elland Road. It has been a dismal campaign, and while Leeds may yet survive this weekend, their current stature in the Premier League might not match the ambitions of Raphinha nor Phillips.

While the prospect of a full season in the Premier League under Jesse Marsch may convince local lad Phillips to stick around, the same can perhaps not be said for Raphinha, who has reportedly agreed terms with Barcelona despite no official bid coming Leeds’ way.

With that in mind, Hay may well be correct to put their futures in doubt, and supporters may face a nervous wait over the summer – even if Leeds can pull off a final-day miracle against Brentford on Sunday.