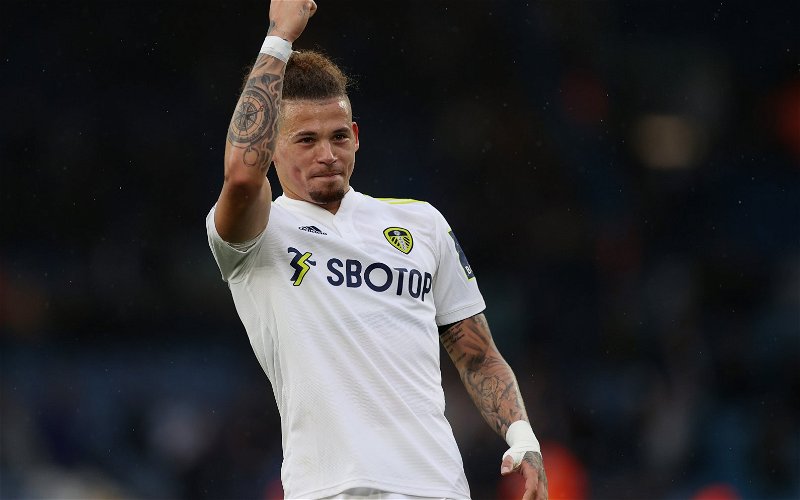 Journalist Jacque Talbot has claimed that if Leeds United get relegated, it would be almost certain that Kalvin Phillips leaves.

Several Premier League clubs are reportedly interested in signing Leeds United midfielder Kalvin Phillips in the summer, with Aston Villa and Newcastle United thought to be leading the race.

Leeds are currently fighting relegation and sit one place above the relegation zone, but with Burnley and Everton both having games in hand, the Whites could slip into the bottom three with just one game to play.

With the reports of a transfer away from Elland Road for Phillips, Talbot claimed to GiveMeSport that he will almost definitely leave if they get relegated.

He said: “If relegation happens, Phillips holds all the cards. I think he has changed agencies recently and players often do that when they want to push through moves.

“I’d imagine, if Leeds go down, it’s almost certain that Phillips would go and I don’t think Leeds fans can really blame him because he’s an England international. He could go to Newcastle, maybe Manchester United, somewhere like that.”

Phillips has been injured for large periods of this season, featuring just 19 times in the Premier League. He has struggled for form during his return to the side, posting the eighth-highest average match rating in the side (6.82), compared to last season when he had the highest average player rating (7.21), as per SofaScore.

Although Phillips has been somewhat out of form since his return to the side, he had an impressive EURO 2020 with England and was superb last campaign, so this would almost certainly be enough to keep him in the Premier League if Leeds went down.

However, if Leeds do remain in the top flight, Phillips may still leave the club in the summer, especially if a more successful side come in for him.