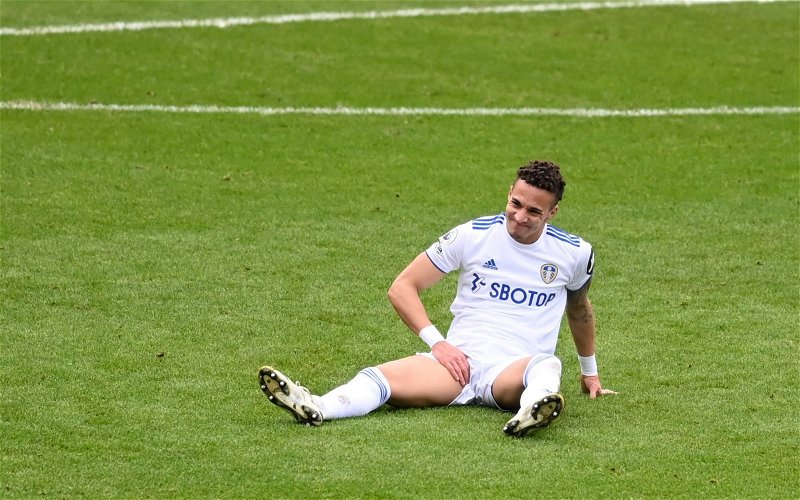 Journalist Beren Cross has slammed Leeds United striker Rodrigo for his poor performance against Brighton & Hove Albion on Sunday, giving the Spaniard a 4/10 in his player ratings.

Leeds managed to get a let equaliser against the Seagulls in the 92nd minute of the game as Pascal Struijk buried a header from close range to take the Whites out of the bottom three by a point with one game left to go in the Premier League season.

The header counted out Brighton’s first-half goal from Danny Welbeck after the former Manchester United man showed his class by beating Diego Llorente in the box and neatly chipping the ball over the Leeds goalkeeper, Illan Meslier.

Leeds had a number of chances to score before their late equaliser with Raphinha coming close from a free-kick and Joe Gelhardt’s overhead kick which was cleared by his own teammate Liam Cooper.

However, one player who did not have a good game, once again, was Spanish forward Rodrigo who failed to make an impact throughout the 90 minutes. This sentiment was felt by Leeds Live journalist Cross who branded the striker with a 4/10 in his player ratings.

Cross wrote, “Gathered himself after the break with one delightful, arced pass in behind, but the standard was set low in an abject first period which would have warranted a half-time bath. 4”.

He also failed to take any shots either on or off-target throughout and his only two attempts were blocked. He racked up zero dribble attempts with only one cross and one failed long ball attempt. The Spaniard lost possession of the ball 12 times in the game and only managed to win one of his five ground duels and two of his five aerial duels, committing two fouls on top of this.

Leeds have dragged themselves out of the bottom three with this late draw, for now, but with a huge game away at Brentford coming up on the last day of the season they will need all of their players on form. Rodrigo cannot afford another bad game like this, it was a bad performance at any level of the game, but especially bad for a Premier League player.