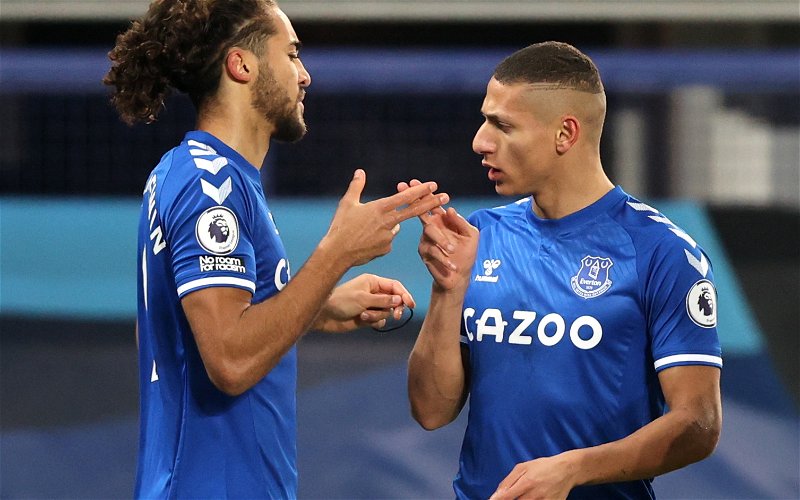 Dean Jones has claimed on the Chasing Green Arrows YouTube channel that one of Richralison or Dominic Calvert-Lewin will leave Everton this summer.

Richarlison has been relied on heavily this season with his usual striker teammate Dominic Calvert-Lewin only playing 13 league games this season due to several different injuries and knocks, but the Brazilian has more than stepped up with nine goals, including a crucial winner against Chelsea.

Who would you rather see Everton sell?

The Brazilian has been tipped for an exit in the past with the likes of PSG and Barcelona said to have previously held an interest in the striker, whereas Calvert-Lewin has seen his name linked to Premier League clubs such as Arsenal and Newcastle United.

No matter what league Everton find themselves in next season, Jones believes at least one of Richarlison or Calvert-Lewin with leave the Toffees.

(32:20) “You’ve got Richarlison and, or Calvert-Lewin leaving almost certainly.”

(32:30) “This fan base have been through a lot, they’ve been very angry very many times this season, don’t anger them anymore give them what they want, not what they don’t want.”

TIF Thoughts on the future of Richarlison and Calvert-Lewin…

Richarlison will very likely have a lot of suitors if he decides to leave or Everton slip into the Championship given he’s proven in the Premier League, a Brazilian international and proved he’s willing to thought it out when the going gets tough as it has done at Everton this season.

Calvert-Lewin’s situation is a far more complex one, however, with the striker smashing it last season scoring 16 league goals and getting 13 the campaign before, but the number of games he’s missed this season could seriously put a lot of clubs off signing him this summer.