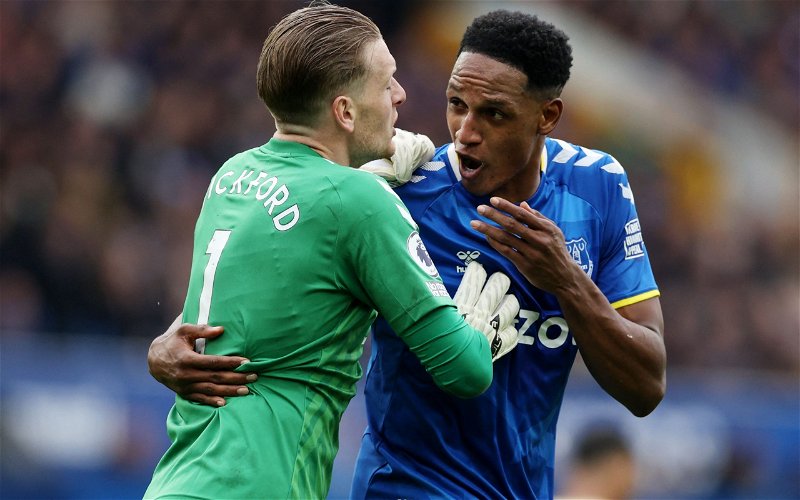 Everton’s Anthony Gordon and Andros Townsend were amongst the players to show their delight with Yerry Mina following the 1-0 victory over Chelsea on Sunday.

The Toffees managed to pick up a crucial win at Goodison Park against the Blues. Richarlison scored the game’s only goal shortly after half-time following a mistake from Cesar Azpilicueta, and Frank Lampard’s men were defensively resolute for the rest of the encounter, with Mina perhaps the star of the show.

The Colombia international took to Instagram after the game to share a photo from the match, showing him tussling with Kai Havertz, alongside the caption: “Let’s bring hope together.”

Townsend responded, lauding the 27-year-old as “unbelievable”, while Gordon called him a “machine”. Fabian Delph was also among the others to comment.

Mina put in a monstrous performance as the Toffees pulled off a shock result. He won four of his five duels, made four clearances and blocked two shots, picking up a SofaScore rating of 7.4. The most important component of his play, though, was perhaps getting into the head of Havertz, who was giving as good as he got for most of the 90 minutes but was unable to match Mina’s physicality.

For Everton, though, this is just one of several results they need before the end of the season if they want to stay in the Premier League. They remain 18th in the table, two points behind Leeds in the position above them, although they do have a game in hand.

Leicester City, Watford and Brentford are going to offer different challenges, and Everton will need to be more on the front foot in those encounters than against Chelsea. Mina’s displays, along with several others, will be vital between now and the end of the term.